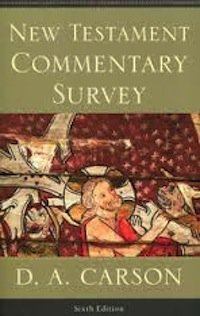 Buy from Amazon Buy from WTS Bookstore
Buying commentaries is often a difficult proposition. There are so many available and yet so few that are really solid. A good commentary is an invaluable aid in leading the reader to the cross; a poor commentary tends to lead anywhere but. With commentary prices being what they are, it hurts to purchase one only to find that it is a poor choice. New Testament Commentary Survey, edited by D.A. Carson and now in its sixth edition, seeks to provide guidance on the best options available.

Originally written by Anthony C. Thiselton under the title Personal Suggestions About a Minister’s Library, the book was revised in 1973 and renamed to New Testament Commentary Survey. In 1976 D.A. Carson assumed authorship and updated it in 1976, 1984, 2001. “They years fly by,” writes Carson, “and new commentaries keep appearing–and so we have arrived at the sixth edition” published in 2007 by Baker Academic.

The purpose of this book is “to provide theological students and ministers with a handy survey of the resources, especially commentaries, that are available in English to facilitate an understanding of the NT. The mature scholar is not in view.” When writing a book such as this one, it would be easy to give a blanket endorsement of titles written by authors whose theology closely aligns with your own, but I was glad to see that Carson is able to look beyond this. “Theologically I am an evangelical, but many of the positive assessments offered in these notes are in connection with books written from the vantage point of some other theological tradition: the usefulness of a commentary sometimes turns on something other than the theological stance of its author–assuming, of course, that commentaries are read critically, as they should be whatever one’s theological heritage. Conversely, just because a commentary stands within the evangelical tradition does not necessarily mean that it is a good book. It may be thoroughly orthodox but poorly written, uninformed, or quick to import from other biblical passages meanings that cannot rightly be found in the texts on which comment is being offered.” This book, then, is a guide to commentaries and not necessarily to orthodoxy. Carson offers brief assessments of many works, including comments on “the work’s level, general competence, and so forth.” He points out the theological slant of a book when he feels this is important.

While the majority of the book deals with suggestions for individual books of the Bible, Carson does spend some time dealing with commentary series, both “series worth noting but not pursuing” and “more substantial series.” He also glances at one-volume multi-author commentaries, one-author sets, and older commentaries. A complete chapter is dedicated to “Supplements to Commentaries” and covers resources such as New Testament introductions and New Testament theologies. These sections are followed by suggestions for each book of the Bible.

Because of the vast number of resources available, and because this book is meant to be only a survey, many commentaries receive only a brief paragraph. For example, when discussing MacArthur’s commentary on Matthew, Carson writes, “A hybrid difficult to classify–part commentary, part expository sermon–is the work of John MacArthur in 4 vols (/Moody 1985-89, $21.99 per vol.). These books are wordy and often betray too little time and care taken with the text, so that they cannot be read as reliable commentary; but the amount of information goes beyond that of most expositions. Doubtless they will well serve the well-read layperson and the poorly trained preacher.” When discussing further commentaries written by MacArthur, Carson tends to provide only a few words and then direct the reader back to these comments for an overview of the series. Some commentaries receive only a few words, such as these dealing with Ryken’s commentary on Galatians: “The volume by Phillip Graham Ryken is solid Reformed exposition (/Presbyterian & Reformed 2005, $24.95).” An author index in the back is helpful to lead directly to Carson’s assessment of the work of any particular author.

The book concludes with a list of “best buys,” which does not necessarily list the best commentary for each of the books of the Bible, but serves as a subjective list that “identifies commentaries that are a good value for the money for the theological student or well-trained preacher who is interested in understanding the Scriptures and who is willing to read commentaries critically.” It is a cheat-sheet of sorts, pointing to good books that can be had at a reasonable price.

While the reader’s experience with this book will vary depending upon his agreement with Carson and Carson’s theology, this volume is a helpful companion to those who wish to have some guidance in the commentaries they purchase. It is a resource that can benefit any pastor, student of theology, or anyone else who cares to purchase commentaries.