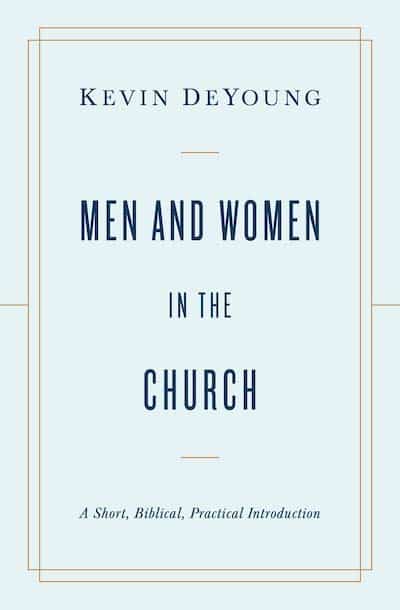 A book about a Christian perspective on manhood and womanhood faces an immediate challenge: Do we really need another one? There are, after all, any number of titles that deal with the subject and do so with skill. Could there really be a place for one more?

Kevin DeYoung believes there is and, for that reason, has written Men and Women in the Church: A Short, Biblical, Practical Introduction. He explains that it is meant to stand apart from others in its purpose. “Our church has a book nook in the corner of our main lobby. I have often wished for a book there that explained the Bible’s teaching about men and women in the church in a way that the interested layperson could understand and in a size that he or she could read in a few hours. I have wished for a book that would argue its case without being argumentative; a book I could give to other pastors wrestling with this issue; and a book pastors could give to their elders, deacons, and trustees that they would actually read; a book that displays exegetical integrity with minimal technical jargon; a book weightier than a pamphlet but lighter than a doorstop.”

This is exactly the book he has written. It unapologetically explains and defends the complementarian position, which insists that God has designed men and women to be complementary to one another in life, church, and family. Though few people love the word “complementarian,” he believes it is an appropriate choice because “it’s hard to tell the story of the Bible without a word that communicates ‘different but fitting together.’” The word “complementary” best fits that purpose. He briefly explains what the position entails. “As a complementarian, I believe that God’s design is for men to lead, serve, and protect, and that, in the church, women can thrive under this leadership as they too labor with biblical faithfulness and fidelity according to the wisdom and beauty of God’s created order.”

The book is divided into two parts. Part 1 explores what the Bible says about men and women, and manhood and womanhood, while part 2 answers specific questions and addresses particular challenges. Part 1 begins at the beginning, of course, with the first 3 chapters of Genesis which tells of God’s creation and man’s fall into sin. He then surveys the Old Testament to identify the patterns it describes as it pertains to men and women. From there he moves to a survey of the New Testament before focusing in on a number of crucial texts: key verses from 1 Corinthians 11 and 14, Ephesians 5, 1 Timothy 2, and 1 Timothy 3. Here he deals with difficult issues like headship and head coverings, the leadership and submission dynamic, the demand for quietness in worship services, and male-only eldership within the local church.

In part 2 he turns his focus to common objections such as Galatians 3:28 (“there is no male and female”) and Ephesians 5:21 (“submitting to one another”), along with the subject of slavery and the biblical examples of female leaders and teachers. He looks as well to the importance of raising boys to be boys and girls to be girls and of the notion that God’s will for his people is for them to follow him in distinctly masculine and feminine ways. “We are not philosophical nominalists who deny universals and believe only in particulars. We don’t just have males and females; there also exists maleness and femaleness. God did not create androgynous human beings, and he does not redeem us to become androgynous Christians. God made us male and female, and he sanctifies us by the Spirit so that we might follow Christ as men and follow Christ as women.” A closing appendix looks at why women may not preach in a church, even if they do so under the authority of male elders.

“My overriding desire,” DeYoung says, “is to put into the hands of churches, leaders, and curious Christians a work that is intelligent and readable.” And in that he has succeeded well. One of his particular talents is explaining complicated subjects in a simple way, and that talent is on full display in this book. Those who read it will better understand the complementarian position and see how it is grounded in God’s Word. They will understand some of the contemporary challenges to that position and learn why such challenges are invalid. They will also know better how to live out their theology in their own lives, their own churches, and their own families. And for that reason, among others, I’m glad to recommend Men and Women in the Church.