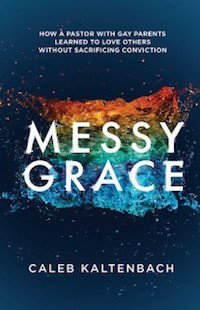 When he was a teenager, Caleb Kaltenbach came out to his parents. With fear and trembling, he told first his father and then his mother about a growing realization within, about his acceptance of a whole new identity. His parents responded coldly, they responded with disappointment, they responded with anger, they responded by telling Caleb that he had betrayed them and all they stood for. His is like many other coming out stories you have heard except for this: Caleb was coming out as a Christian to his gay parents.

Caleb Kaltenbach’s parents, both accomplished academics, divorced when he was just 3. Shortly thereafter his mother fell in love with a woman and settled into life with her. His father began to live as a gay man, though it would take some time before Caleb understood that. His childhood, then, was split between his father’s home, where he experienced a watered-down, liberal version of the Christian faith, and his mother’s home where he heard only that the Bible was homophobic and irrelevant, that Jesus was for the weak and pathetic, and that Christians were hateful. His mother was active in the gay rights movement, serving on GLAAD’s board, marching in parades, and fighting hard for the rights of gay people to be fully accepted and fully integrated into every part of society.

While Caleb grew up in this environment he had friends who were Christians and eventually those Christians began to share the gospel with him. He began to investigate the claims of the Bible and began to investigate the man who said he was the world’s only Savior. Over time he became persuaded that it was all true and put his faith in Jesus Christ. But then he had to tell his parents. He had to convince his parents that he still loved them, that he still wanted to be their son, that he still wanted them to be part of his life, that his new religious convictions did nothing to change his love and respect for them. They would always be his parents and he would always love them.

Messy Grace: How a Pastor with Gay Parents Learned to Love Others Without Sacrificing Conviction is his story. It is part autobiography and part teaching tool. He tells his story of growing up in the LGBT community, of becoming a Christian, and of learning how to be a Christian who still loves and honors his parents. All the while he instructs the reader on how to love others without sacrificing conviction. He tells of how he saw Christians behave so badly around homosexuals and how, in many cases, the LGBT community fairly harbors terrible hurt and suspicion toward Christians. He tells of how it is possible to build bridges into the gay community without compromise. He even tells of how his long care and concern for his parents led each of them to make a profession of faith in Christ.

One of Messy Grace’s strengths is Kaltenbach’s description of just how much homosexuality provides an identity. For that reason, when you tell a homosexual that he must renounce his homosexuality, you are not asking him to renounce mere behavior, but an entire identity, an entire means of self-understanding. What we may see as behavior, he sees as the very core of his being. Many of our calls and convictions are too simplistic and, for that reason, not very compelling. But the beauty of the Christian faith is that it, too, offers an identity. It offers the much deeper and better identity of disciple of Christ. And this is where so many attempts at evangelism fall flat—we worry more about behavior than identity. We concern ourselves with a person’s sexuality, telling him he must change that, when really we should first concern ourselves with the man’s identity, showing him that Christ demands this change of identity of each one of his followers. No matter who we are, no matter our sin, no matter our past, we need a change at the deepest part of us. And only then do we start to talk about changing our sexuality, changing our behavior.

Messy Grace is a sound introduction to matters related to homosexuality and the LGBT community. Kaltenbach manages to walk the line of grace and truth, to communicate both love for people and respect for the Word of God. I do not agree with every one of his conclusions—for example, he makes attendance at a gay wedding a matter of conscience where I would see the issue in closer to absolute terms—but he does not expect every reader to agree with every conclusion. I appreciate how Dr. Thomas Schreiner summarizes it: “The story is riveting and the gospel pulsates throughout the book. Kaltenbach charts out for us what it looks like to be people of grace and truth, to be people of mercy with a mission.” In that way, Messy Grace makes a valuable addition to an important conversation.