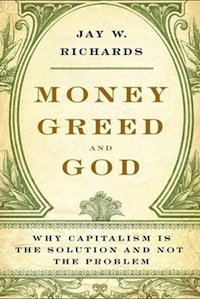 Buy from Amazon
The twentieth century was witness to a great battle between capitalism and communism. Early in the twenty-first century it is clear that capitalism won a resounding victory. Yet many people living in victorious nations continue to be uncomfortable with capitalism. They see it as a system of economics, a way of life that transfers wealth from poor to rich, that exploits the planet, that is somehow inherently biased toward the few at the expense of the many. An increasing number of increasingly vocal Christians even claim that capitalism is at odds with the teachings of the Bible. After reading Jesus’ words that “the love of money is a root of all kinds of evil” they determine that capitalism, which seems to be founded on just such a love, must also be evil. Could it be, though, that such claims are based on a misunderstanding of capitalism? Could all these people be battling against a mere caricature? Jay Richards thinks so and he dedicates Greed, Money, and God to dispelling untruths and replacing them with hard facts. Through it all he seeks to show that capitalism is not the problem, but the solution.

Economics is undoubtedly a field that many of us take for granted. We may be able to define it in part, but rarely can we really explain it. According to Richards, economics is at its heart, “about us–what we choose, what we value, what we represent in language and symbols, how we interact with each other in a market, and especially how we produce, exchange, and distribute goods, services, risk, and wealth. Understand these things, and you’re well on your way to knowing what you need to know about economics.” A more traditional definition is this: “the science which studies human behavior as a relationship between ends and scarce means which have alternative uses.” It is, then, fundamental to all we do. But how often do we think about it and how often do we do so from a distinctly Christian perspective?

Money, Greed, and God is just such a study. Richards structures the book around eight myths, eight common misunderstandings about the very nature of capitalism. They are:

The Nirvana Myth in which capitalism is contrasted not with a realistic alternative but with an unrealizable ideal. While we acknowledge that at some time God will triumph over all that is evil, we also know that in the here and now any system will necessarily be imperfect. And so we cannot rightly set our standards at perfection. The Nirvana Myth stood behind communism and its dream of building utopian nations where equality ruled. But the experiment was a dismal failure that cost tens of millions of lives.

The Piety Myth in which we focus on good intentions rather than the unintended consequences of our actions. A contemporary example of this myth in action comes when we look at “fair trade.” We are growing accustomed, I think, to being presented with the option of buying fair trade coffee, fair trade gifts, and so on. The promise is that when we do this we bring greater profits to the people at the very beginning of the process–the person who grows or picks the coffee beans or the person who pieces together the jewelry. We see it also in foreign aid where billions or trillions of dollars are sent from the first world to the third world. Though from the outside it may appear that these are kind and loving actions, the reality is that we do not see the unintended consequences of such actions. They often bring about more harm than good.

The Zero-Sum Game Myth where we believe that any trade or exchange requires that there be both a winner and a loser. This may be the case when markets are burdened with too many regulations, but where the markets are free, there can always be win-win transactions. Still, people are prone to the feeling that it is only through increased regulation that we can guarantee that there will not be losers.

The Materialist Myth which insists the wealth is not created but merely transferred (and usually from the poor to the rich). Though we are centuries removed from believing that there is a static amount of wealth in the world, centuries from the understanding that one person always gets rich at the expense of another, we remain prone to thinking this is true. When we see the fantastic wealth of the few we somehow forget that in many cases even the poorest are much better off than they were at one time. The fact is that wealth may be created, and not merely transferred.

The Greed Myth which believes that the very essence of capitalism is greed.

The Usury Myth which leads us to believe that working with money is inherently immoral and that charging interest is always exploitative. Many Christians look to Old Testament laws regarding usury and somehow feel, even if only in the back of their minds, that there is something ignoble about dealing with finances. But when we understand capitalism we can understand that such biblical precepts, even though they may guide us in some situations, are often not as hard-and-fast as we might think.

The Artsy Myth in which we confuse aesthetic myths with economic arguments. Many people argue that capitalism is inherently utilitarian, creating wealth at the expense of all that is beautiful. But here Richards shows that it is not capitalism itself that is to blame, but rather the materialist worldview endemic in our culture.

The Freeze-Frame Myth which says that things always stay the same (so that population trends will continue indefinitely or that a natural resource will always be needed in the same way that it is today). This leads to an interesting discussion about the supposed shortage of resources such as oil and the prognostications about the imminent demise of our planet due to global warming.

As Richards picks apart these eight myths and exposes the faulty thinking that underlie them, he raises a host of issues that will cause the reader to pause and consider. As I read, there were at least three big takeaways. First, I learned the importance of private property. There is something inherent in ownership that causes us to value possessions differently. Strong laws guarding private ownership stimulates an economy while lax laws or laws prohibiting ownership will depress an economy. Second, I learned of the importance of economic freedom. As we are seeing in this current downturn, the proposed solutions often entail greater restrictions, more government involvement. But as long as there is some structure of law to guarantee economic freedom, an economy can thrive. Excessive regulation hampers more than it helps. And third, I learned the importance of understanding that wealth is not static. There is not a static amount of wealth in the world that must be divided between each of the earth’s inhabitants. Instead, wealth can be created and, as that happens, it may be proportioned to those who are most in need of it. Hence there is something noble in laboring, in beginning capitalistic enterprises and in succeeding in them, provided that the proceeds are used in a way that honors God. In creating wealth we are acting in the image of the One who created us.

Capitalism is, in the mind of this economist, a special gift of providence. And as you read his book you will see how he arrives at this conclusion. Rather than being a system we are ashamed of, we can actually give praise and glory to God for it. While capitalism may not be the most perfect economic system we will ever know, it seems clear that it is the best so far. Countless others have been tried and have been found seriously wanting. God, in his providence, has given us a system in which we can work and create and labor for his glory.