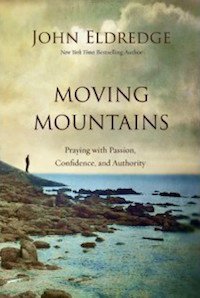 It seems that every Christian author eventually tries his hand at a book on prayer. And when our favorite author takes his turn, we, the readers, tend to pick it up. After all, prayer is difficult and few of us are confident that we are praying right and praying well. John Eldredge qualifies as a favorite author to thousands of Christians and he has now tried his hand at a book on prayer in Moving Mountains: Praying with Passion, Confidence, and Authority.

At the very beginning of the book, Eldredge names a common concern when it comes to praying: “Some prayers work, and some prayers don’t. We might be embarrassed to admit that, but you know it’s true. If you are interested in prayer at all, you are interested in prayer that works. That kind of prayer is the focus of this book.” That sounds good, right? We all want to pray in such a way that we are confident in what we pray and confident that we will see results. In this book he teaches both theology and methodology for prayer. “I’m not going to try and convince you that you ought to pray. If the struggles of those you love, the heartache of the world, or your own dreams, desires, and afflictions do not move you, nothing I say here would be more compelling. What I can do is put a far, far more effective understanding of prayer in your hands, together with enough applications that you begin to get a feel for how things work.” That is exactly what we want from a book on prayer, right?

Foundational to Eldredge’s method is the concept of spiritual authority. The world, he teaches, is caught up in a giant spiritual battle between competing forces of light and darkness. We are in the middle of that battle and have a role to play in the fight. Through our faith in Christ and his death and resurrection, we are granted his authority. “You have been given a share in the authority of Jesus Christ, Son of the living God, Lord of the heavens and the earth. Do you wield it in prayer?” Our responsibility in prayer is to speak into darkness with the authority of Jesus. We do this through specific kinds of prayer—prayers of intervention, consecration, warfare, and both inner and physical healing.

The book has several notable strengths. When discussing our tendency to give up when we do not immediately see the results we want, Eldredge brings valuable encouragement: When we do this “we abandon the very treasure God has given us for not losing heart, for moving the ‘mountains’ in front of us, bringing about the changes we so desperately want to see in our world.” God means for us to pray and to keep praying, not to give up too soon. Later he rejoices in the reality that “We find ourselves in the sort of universe where prayer plays a crucial role, sometimes, the deciding role. Our choices matter.” They do! God could work apart from prayer but he chooses to work through and because of prayer. It is a joy and honor that we get to join him in this work in very meaningful ways. Further, he includes many, many encouragements to pray, to pray boldly, to pray urgently, and to pray confidently. In an area where we are always tempted to grow weary and complacent, these are useful challenges.

However, the book’s strengths are far overshadowed by its glaring weaknesses. Let me tell you about three of them.

The first weakness is that Eldredge never quite defines what it means for prayer to be successful. His book focuses on prayer that works, but he never tells us exactly what it means for prayer to work. Are the prayers that work the ones that bring about exactly what we pray for? This seems to be his functional definition. But it is naive and discouraging to insist that prayers that work are ones that bring about the results we want. We are far too limited, far too naive, far too selfish, far too small, far too human to make this our standard. In that way his book suffers in its very purpose.

The second weakness is that his understanding of prayer and his method for prayer ignores far too much of the deep, rich Christian tradition of prayer and instead focuses on a few modern-day outliers such as Neil T. Anderson. Timothy Keller recently wrote Prayer: Experiencing Awe and Intimacy with God (my review) and deliberately looked back to learn from our forebears, grounding his prayer in Scripture and in the Christian tradition. Eldredge, on the other hand, looks primarily to fringe contemporary teachers. His method of prayer bears no resemblance to the prayers of the Church Fathers or Reformers. Instead, it is very nearly pagan in its obsession with witches and curses, with its constant proclamations and imprecations against Satan and his forces, with its repetition and its oil-anointing of people and objects. It calls for silent listening prayers and for praying in private spiritual languages. Most of these would be completely foreign to the vast majority of Christians who have gone before us. (Interestingly, absent from the book is any substantial attention to prayers of repentance or confession.)

Third, Eldredge’s method of prayer is discouragingly complicated. Though he emphasizes the beauty of relationship with God, his prayer method devolves to the formality of following long and complicated scripts. Effective prayer becomes dependent on consecrating the right body parts, binding the right demons, and claiming the right promises. “Often we will be very specific with those parts of the body that are needing the healing, as in, ‘I consecrate my bone marrow and my white blood cells’ in the case of leukemia.” At the end of the book he includes prayers that go on like this for, literally, pages at a time:

The prayer method that is meant to free the Christian must eventually bog him down in these endless formulas. The person praying must always live in fear that he has forgotten to consecrate the appropriate body part, that he has neglected to bind the troublesome demon, that he is living under a curse he has not yet been able to identify and reverse. Ultimately, it seems, prayer that does not work must be prayer that has not followed the appropriate script.

There are still other weaknesses such as the kind of confused weirdness that tends to pervade Eldredge’s books. When his house is threatened but not consumed by a fire a friend gets in touch to say “I saw an angel, above your house, spreading its wings and flapping them against the wind and the fire. I think you are going to be okay.” He accepts this at face value. Another time he says, “A man I knew was in Washington, DC during the inauguration of one of our less respectable presidents of the last century; he said that he could see demons rushing into the White House from all directions.” He experiences chest pains and learns from an expert in spiritual warfare that these are caused by a coven of witches that has placed a curse on his heart. He warns of the danger of heavy metal music in inviting demons into a home—demons that will need to be banished if and when a Christian family moves in. “We renounce the sins of all previous owners, renters, guests, even the builder. We cancel every claim the enemy can make here, by the blood of Jesus Christ. We cleanse this home with the blood of Christ—everything spiritual, everything physical.” He even recommends consecrating and cleansing hotel rooms during vacations.

Moving Mountains is yet another book targeted at Christians that plays on the insatiable desire for more. We want more of God, more relationship, more intimacy, more assurance, more confidence. Eldredge promises the kind of more so many are looking for. He plays the role of the guru who knows the methods, who knows the formulas. But his route to having more of God is hopelessly superstitious, at times abiblical and at times full-out unbiblical.

I began this review by remarking that every author eventually tries his hand at a book on prayer. The downside to this is that we end up with books like Eldredge’s—books that are really, really bad. The upside is that we have plenty of others to choose from. And, indeed, we are rich in excellent books on prayer. I recommend you skip Moving Mountains and find something that is far more worthy of your money, your time, and your attention. (Perhaps begin with this list of recommendations.)