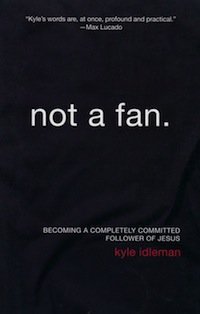 This review of Kyle Idleman’s Not a Fan comes a little bit late. The book released almost two years ago and has sold over a half million copies. I have been meaning to read it for some time, but something else always seemed more urgent. However, with Idleman’s follow-up releasing in the next month–a book that is likely to hit the list of bestsellers before Not a Fan has fallen off–it seemed logical to read the first before the second.

Not a Fan is a call to become a completely committed follower of Jesus. It is hardly alone in this category, this subgenre of Christian living or spiritual growth. Idleman’s unique angle is in focusing on the distinction between fans and followers. He looks at the Evangelical landscape and sees that there are many people who are mere hangers-on, mere enthusiasts for Jesus. “It may seem that there are many followers of Jesus, but if they were honestly to define the relationship they have with him I am not sure it would be accurate to describe them as followers. It seems to me that there is a more suitable word to describe them. They are not followers of Jesus. They are fans of Jesus.” In these circles Jesus is almost indistinguishable from a celebrity with committed fans “who know all about him, but they don’t know him.”

He shares many good insights into contemporary Evangelicalism. “My concern is that many of our churches in America have gone from being sanctuaries to becoming stadiums. And every week all the fans come to the stadium where they cheer for Jesus but have no interest in truly following him. The biggest threat to the church today is fans who call themselves Christians but aren’t actually interested in following Christ. They want to be close enough to Jesus to get all the benefits, but not so close that it requires anything from them.” There is no doubt that this is true. He pushes back against easy-believism, against the kind of seeker friendliness that is all promise with no commitment. “Following by definition requires more than mental assent, it calls for movement. One of the reasons our churches can become fan factories is that we have separated the message of ‘believe’ from the message ‘follow’.” Again, this is very true, and refreshing to hear from a pastor who leads one of the most mega of America’s megachurches; his Southeast Christian Church in Louisville, Kentucky, is the 5th largest church in America with over 20,000 in attendance each weekend.

He calls on those who profess faith in Christ to diagnose the nature of their relationship by asking these questions:

These are helpful questions that can lead to an accurate diagnosis. There are far too many church-goers who love only what Jesus does for them or how Jesus makes them feel. The follower-fan distinction is a helpful way of understanding the difference and provides a clear call to a clear commitment.

Still, I have a few concerns with the book.

While follower-fan is the book’s primary metaphor, Idleman also relies on words, phrases and concepts related to teenage romance. When he wants a Christian to understand whether he is a fan or follower, Idleman calls him to DTR, an acronym for “Define The Relationship.” That teenage feel persists throughout the book and is accompanied by quite a lot of puerile humor. Jokes abound, as do references to pop culture. A little bit of humor and a little bit of sarcasm would be one thing, but Idleman relies on it too much and it grows tiresome. It becomes clear why the book has such appeal to a younger demographic.

As Idleman calls the reader to define their relationship with Jesus, he looks to the New Testament and to several stories of people whom he says needed to do that very thing. But I think he pushes a little bit too hard to squeeze these stories into his grid. It’s not that what he says is outright wrong; rather, he seems to miss the point of these incidents from the life of Jesus and to stretch them just a little bit too far.

But my greatest concern is that Idleman describes the gospel as the gateway to the Christian life (which it is!) but not as the power and the joy of the entire Christian life (which it is as well). Without this focus on the gospel as the very center of our commitment to God, the book slips into being a call to commit to Jesus and then to commit to try harder. The fact is that we will all be fans at times, and only the gospel offers us the deepest peace, forgiveness and motivation to carry on. Unfortunately Idleman concentrates on the gospels so much, and the epistles so little, that he offers an unbalanced and incomplete view of Christian living. The reader concerned about his tendency to be a fan instead of a follower will learn to evaluate himself by his fervor rather than the finished work of Jesus Christ. Robert Murray McCheyne wisely counseled Christians, “For every one look at your sins, take ten looks at Christ.” Some of that wisdom would have gone a long way here.

Not a Fan bears a clear resemblance to two other recent bestsellers: David Platt’s Radical and Francis Chan’s Crazy Love. Like these books, Not a Fan identifies our tendency toward complacency. Interestingly, it may also have anticipated their follow-ups: Follow Me and Multiply, books that look to the command to be a follower. These are popular and important themes in the church today, and for good reason. If Not a Fan was the only book in the genre, there may be reason to recommend it, but as it stands, there are other authors who are saying similar things, but with clearer reference to the gospel. I would recommend Platt and Chan’s books ahead of Idleman’s.