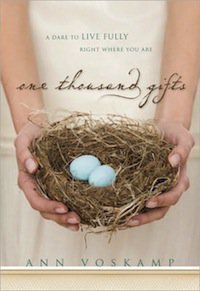 I guess I’m a little late to the party. Ann Voskamp’s One Thousand Gifts was released almost eighteen months ago and since then has been a consistent bestseller. If anecdotal evidence can be trusted, its appeal has been almost entirely to women. Not surprisingly, I’ve received many questions about the book and most of them have come from women–women who have been given the book or who have been told to read it. So at long last I had the book sent to my Kindle and I gave it a read.

The book’s appeal seems to come on at least two levels. In the first place, it features a uniquely poetic form of writing. Voskamp has a style all her own; it appeals to some and is exasperating to others. Just to give you a taste, here is an excerpt from the first page:

A glowing sun-orb fills an August sky the day this story begins, the day I am born, the day I begin to live.

And I fill my mother’s tearing ring of fire with my body emerging, virgin lungs searing with air of this earth and I enter the world like every person born enters the world: with clenched fists.

From the diameter of her fullness, I empty her out–and she bleeds. Vernix-creased and squalling, I am held to the light.

Voskamp likes to use language in unexpected ways, moving around the order of words, blurring the lines between prose and poetry so that a gift isn’t “tied with ribbon,” but is “ribbon bound.” Sentence fragments are acceptable, rules malleable. There is clearly a kind of appeal to it so that those who don’t hate it, love it.

The second level of the book’s appeal involves the topic so that what she writes about resounds with many of her readers.

Voskamp’s story begins with the twin themes of suffering and ingratitude. She recounts the heartbreaking story of the death of her sister and shows how this, along with other great sorrows and disappointments, drove gratitude far away. One Thousand Gifts is a biographical account of first seeing her need for gratitude and then learning to express it not just in spite of life’s trials, but even through them. She refers to this as eucharisteo, a Greek word for thanksgiving.

Voskamp comes to consider ingratitude the very heart of humanity’s fall into sin. “Non-eucharisteo, ingratitude, was the fall–humanity’s discontent with all that God freely gives. That is what has scraped me raw: ungratefulness.” The remedy, then, is to restore thanksgiving. “Then to find Eden, the abundance of Paradise, I’d need to forsake my non-eucharisteo, my bruised and bloodied ungrateful life, and grab hold to eucharisteo, a lifestyle of thanksgiving.” The way she does this, or the way she does this tangibly at least, is to attempt to order all that she has to be grateful for. She begins to scratch out a list of one thousand gifts. She challenges herself with this, to write down 1,000 gifts of God’s grace.

What are these gifts? They are the ordinary and every day things like “morning shadows across old floors, jam piled high on the toast, cry of blue jay from high in the spruce” (those are numbers 1, 2 and 3 on the list). As she writes, she finds that she begins to think and speak the language of gratitude. Her life is transformed as she discovers how to be grateful. She goes so far as to make this very nearly sacramental, saying “If clinging to His goodness is the highest form of prayer, then seeing His goodness with a pen, with the shutter, with a word of thanks, these really are the most sacred acts conceivable.” As she learns gratitude in her own life, she calls on her readers to do the same, to begin that list of one thousand gifts. Perhaps they, too, will ascend to this new level of Christian experience that she has found.

Having now read this book, I want to point to a couple of some significant concerns.

The first pertains to the people who have influenced Voskamp in her journey to eucharisteo. Her theology is an eclectic combination of Protestantism and Catholic or Catholic-influenced mysticism. She either quotes or is influenced by authors like Henri Nouwen, Brennan Manning, Teresa of Avila, Brother Lawrence, Annie Dillard, and Dallas Willard. This brings to the book a deep-rooted mysticism that at times seems even to border on the view that the divine exists within and extends to all parts of nature (a teaching known as panentheism). At heart, mysticism promotes the view that God can be experienced, and perhaps even best experienced, outside of Scripture. This comes in direct contrast to what Scripture itself says, that Scripture is God’s final and sufficient revelation of himself.

Based on the people who influence her, it should not be surprising that her book ends up leading toward a higher plane of holiness or Christian experience that borders on spiritual ecstasy. This ecstasy comes by way of an almost sexual experience with God.

By the book’s final chapter Voskamp has realized that she still hasn’t put it all together, that something is still missing, and so, in her words, “I fly to Paris and discover how to make love to God.” This closing chapter, “The Joy of Intimacy,” is her discovery of God through something akin to sexual intimacy. In a chapter laden with intimate imagery she falls in love with God again, but this time hears him urging to respond. She wants more of him. And then at last she experiences some kind of spiritual climax, some understanding of what it means to fully live, of what it means to be one with Christ, to experience the deepest kind of union. “God makes love with grace upon grace, every moment a making of His love for us. [C]ouldn’t I make love to God, making every moment love for Him? To know Him the way Adam knew Eve. Spirit skin to spirit skin?”

It is true, of course, that the Bible uses imagery of bride and groom to describe the relationship of Christ to his church, but it does not go as far as integrating the sexual component of marriage. Sometimes it is best to allow God to define the parameters of our metaphors rather than taking them to a much greater extent. Voskamp would have done well to limit herself here.

The sexuality of this chapter is not all that concerns me. I am also concerned with the kind of spiritual climax she experiences. Why should she have to travel to a Roman Catholic cathedral in a foreign land in order to truly experience the Lord? “My eyes follow the stone arches rising over us, granite hands clasped in prayer over souls. I think of all who have gone before, the hands of medieval peasants who chiseled the stone under which I now stand. I think of those long-ago believers who had a way of entering into the full life, of finding a passage into God, a historical model of intimacy with God. I lean back to see the spires.”

What does she not understand about the gospel that her ecstasies have to happen in a place dedicated to a false gospel of salvation by grace plus works rather than a gospel of salvation by grace alone through faith alone? Why should they happen in a place dedicated to Our Lady (which is what Notre Dame translates to)? She declares that in the cathedral she is on holy ground, but there is nothing more or less holy about this cathedral than any other place on earth. There must be something wrong not just with the destination but with the whole journey if it leads here, of all places.

Though One Thousand Gifts is not without some strengths, in its own subtle way I believe that it can and will prove dangerous, at least to some. Many will read it, embrace their need for gratitude, and genuinely be more grateful to God. This is well and good. There are many books that contain valuable takeaways even if they also contain significant weaknesses. It doesn’t make you a bad person or an immature Christian if you’ve read it and enjoyed it. But perhaps you’d do well to make sure you haven’t bought into it all the way.

I fear that some will see that Voskamp subtly promotes a higher order of holiness, a higher order of relationship with God, and be dissatisfied that they do not have this for themselves. They may grow discontent not with their ingratitude but with their inability to experience the kind of ecstasy and fervor Voskamp models. What she finds, what she models, is absent from the Bible.

One measure of a good book is that it more clearly displays the power of Scripture to show us our shortcomings and display the gospel’s power over them. In this sense One Thousand Gifts simply does not measure up. And for that reason, among others, I would not recommend it.