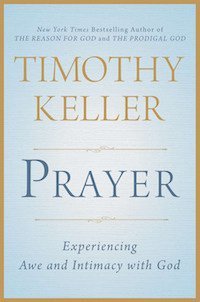 Now here’s the interesting thing. There is not much new in this new book. As Keller says, the best books on prayer have already been written. So instead of pursuing novelty (see The Prayer of Jabez or The Circle Maker or a thousand other books) Keller looks to the past, to the deep wells of Christian history, and draws heavily from Augustine, Luther, Calvin, Owen, and Edwards (and, in more recent history, Edmund Clowney). He understands that any new insights on prayer tend to go farther from rather than closer to biblical truth. Instead of looking for new secrets to discover or keys to unlock, Keller looks for fresh ways of saying those old things. Again, there is nothing profoundly new in this new book, but that is its strength, not its weakness.

Keller begins his book in an interesting place—the tension between two kinds of prayer. Christians tend to describe prayer in one of two ways: communion-centered or kingdom-centered. Communion-centered prayer is “a means to experience God’s love and to know oneness with him. [Such authors] promise a life of peace and of continual resting in God. [They] often give radiant testimonies of feeling regularly surrounded by the divine presence.” Kingdom-centered prayer “sees the essence of prayer not as inward resting but as calling on God to bring in his kingdom. Prayer is viewed as a wrestling match, often—or perhaps ordinarily—without a clear sense of God’s immediate presence.” He opts to discard the either-or view and will not drive a wedge between the two. Prayer is both conversation and encounter with God.

This is not to say he advocates the kind of prayer you might find among the Roman Catholic mystics whose books remain so popular today. In fact, he pushes firmly against mysticism, against meditation as being an emptying of the mind rather than a filling of it, or against rapturous but mindless prayers. But still he leaves plenty of room for true communion with God, and for the illuminating work of the Holy Spirit who may bring Scripture to mind and cause us to understand it better in those times we are prayerfully meditative. Even as he teaches these things, he leans on the Reformers and Puritans.

As I began to read, I had thought that Keller’s purpose in the book might be to try to resolve the mysteries of prayer. Over time, though, I came to see that this is not the case. There is much about prayer we cannot understand and may never understand on this side of eternity (and perhaps even after). Keller peers into these mysteries, but he does not attempt to resolve them. He understands that prayer will always be difficult and never over-promises, never lays out a plan that, if followed, will supposedly bring guaranteed or overwhelming results. We can grow in our understanding of prayer and our skill at prayer, but we will never solve it, and will never pray perfectly.

One particularly interesting aspect of the book is Keller’s definition of prayer. Few books on prayer pause to actually define prayer, but Keller gives it his best shot. Prayer, he says, is a personal, communicative response to the knowledge of God. This accounts for the universality of prayer—all religions, and very nearly all human beings, pray. They pray because they have some knowledge of God through his creation. But as God awakens the hardened hearts of his people, Christians are now able to pray on the basis of much greater and much more specific knowledge. Thus, for the Christian, “praying is continuing a conversation that God has started through his Word and his grace, which eventually becomes a full encounter with him.”

Early in his book Keller critiques most books on prayer as being “primarily theological or devotional or practical, but seldom do they combine the theological, experiential, and methodological all under one cover.” This is what he has attempted to do, and it is exactly what he has done, as displayed in the book’s five parts: Desiring Prayer, Understanding Prayer, Learning Prayer, Deepening Prayer, Doing Prayer. He has written a winsome, well-rounded book that leads through theory and into practice. It is one of the strongest books on prayer I have ever read and it receives my highest recommendation.

Prayer is available at Amazon and Westminster Books.