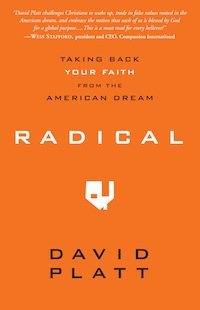 Buy from Amazon Buy from WTS Bookstore
Whatever David Platt is selling, people are buying it. At last count 750,000 copies of Radical were in print and it had been on the New York Times list of bestsellers (paperback advice) for 52 weeks. That is no small achievement! To be frank, it is the kind of achievement every author dreams of.

Radical is a book about escaping the doldrums of the American dream. The American dream (which is a dream shared by pretty much all of the western, developed world and, hence, equally applicable to this Canadian) calls us to complacency, to a life of comfort and ease. We live in big houses and drive nice cars and worship in multi-million dollar churches custom built around all of our favorite programs. We give away a bit of our wealth—the kind of wealth that much of the world can only dream of—but largely live in great comfort. Occasionally we are stirred my images of starving children or by tales of God’s work in foreign lands. But quickly we forget and we go on with our lives, growing our portfolios and filling our homes with stuff.

It’s all very boring. We are born into wealth (at least when compared to the rest of the world), we live wealthy lives, and then die, leaving our wealth to another generation.

Against this backdrop it is not too hard to get us stirred, to get Christians to want to wake up and to do something better, something that seems to count for more. Something radical, even. This is where David Platt comes in and this is where hundreds of thousands are eagerly drinking in his message.

Before I began reading Radical I assumed it was just another of a long list of books that would build upon a shaky theological foundation. I was delighted to find that one of Radical’s great strengths is that it is firmly grounded in the gospel. Platt spends a good bit of time discussing the gospel, the real gospel, and calling the reader to embrace it and live as if it is true. And then, on the basis of that gospel, he calls the reader to do what is radical, to let go of the American dream, a dream that is as alive within the church as it is outside of it. It’s a powerful message that falls on eager ears.

Throughout the book Platt seeks to show how Christians have been drawn in by that American dream and how that dream has influenced our theology and practice. “We have in many areas blindly and unknowingly embraced values and ideas that are common in our culture but are antithetical to the gospel [Jesus] taught.” He admits that he has more questions than answers and that he sees many disconnects in his own life, a humility that serves him well. It is not lost on the author or the reader that Platt is a megachurch pastor who lives in the same comparative luxury that most of us enjoy.

By the time you finish Radical you’ll be charged up. You’ll be ready to sell your home, to give up your car, to move across the world, to ditch the American dream in favor of moving across the world to do mission work. But here’s the thing: You’d better do it quickly because a couple of weeks later you’ll probably be back to normal, back to ordinary.

Platt will get you all fired up. That’s a good thing. At least it can be. But in the midst of all the excitement I worry about excitement fatigue. After all, Radical is far from the only book of this kind—the kind of book that seeks to shake up the western church, to get the church to do something more, something, well, radical. Read Do Hard Things and Crazy Love and Radical and all the rest and you’ll get worked up every time. But the reality is that for the vast majority of us, our lives will not look much different 2 weeks or 2 months or 2 years later.

It’s not that the books are bad as much as they give us little to work with as we move from fantasy to reality, from abstract to personal. In the middle of reading a book it is easy enough to say, “I am going to give it all away.” But then you realize that your wife hasn’t read the book and isn’t quite as eager. And then you realize that you have children and hauling them halfway around the world would have a profound effect upon them. And then you realize that it’s been 6 months and you still haven’t done anything. In fact, the excitement has passed and you realize that life isn’t so bad. There may be some lingering guilt, but you’ve realized that is just isn’t so easy to extract yourself from all of this. Neither does the conviction remain that it’s actually necessary.

So I guess I have several concerns with the book—concerns that stem from the fact that it is well-written and built upon a gospel foundation and very compelling and exciting. These aren’t the kinds of concerns that equal “Don’t read it!” but the kinds that make me wonder if we enjoy reading these books more than we like applying them.

First, I think our attempts to live radically can ignore the Bible’s concern that we be radically godly in character. There is no doubt that I am called by God to live sacrificially and generously. My first calling, though, is to know God, to be shaped by him and on that basis to preach the gospel and to live as if it is true. I am called to do all of this right where the Lord has placed me. This means that there is great dignity and great value in doing whatever it is that I want to do, like to do, and can honor God doing. We do not all need to be foreign missionaries and evangelists; we do not all need to move to faraway lands. We can (and must!) primarily honor God in whatever it is he has given us to do. I am concerned that it is difficult to read this book and believe its message and not feel that normal life is dishonoring to God. Maybe we need to recover a better doctrine of vocation before we are ready for the radical message. Maybe we need to learn to be faithful in our own neighborhoods before believing we will be faithful in other things.

Second, I think we would do well to wrestle through some of the difficult questions of economics. This is one of the great tensions of living in this place in this world. A $300 car payment sounds shameful when you consider that for many people that is as much money as they live off for an entire year. But it’s also just reality—we need cars and that is just what they cost in our context. We may feel evil for spending $20,000 on a car; but that is just what cars cost. The simple solution is to drive beat-up cars and send as much money as we can to foreign missions. But it’s not that simple. Third world countries do not need money; they need economic infrastructure that can generate wealth. Helping the poor is not as simple as giving them money—something to keep in mind when approached on the street by a panhandler. These are the kinds of things I find myself wrestling with.

Maybe this is why Platt says that he has more questions than answers. At the end of it all, I did too. I love the call for radical living and think the western church would do well to be shaken up. I’m just not convinced that this book and the others like it are helping us answer the more difficult questions. But then again, I think that’s okay. I love a book that makes me grapple with difficult questions, even if the answers are hard to come by.

There is genuine value in reading Radical, I’m sure of it. But maybe it’s best not to read it if you’ve already read several other books in a similar vein. Maybe it would be best to go back to some of those books and ask, “What have I actually done about it?” Sooner or later we either have to take action or figure out if maybe we need to go about being radical in a whole different way. If your big takeaway from Radical is a short-lived excitement followed by long-term guilt or apathy, either the message is wrong or your application of it is wrong.