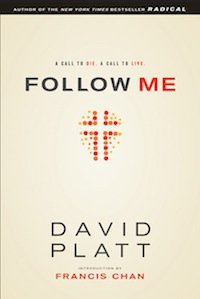 Buy from Amazon Buy from WTS Bookstore
David Platt’s Radical was one of those rare books that catapults a first-time author straight to top of the charts. For two years it was a fixture on the lists of bestsellers and even today it remains a top seller in the Christian ranks. Radical was a call for Christians to escape the doldrums of the American dream and to live for something better, something that counts for far more. Books with this message are hardly a rarity today, but what set this one apart was its grounding in the good news of the gospel.

Almost three years later Platt brings us his follow-up, Follow Me. Where in Radical he exposed cultural values and ideas that are opposed to the gospel, his purpose in Follow Me is “to move from what we let go of to whom he hold on to. I want to explore not only the gravity of what we must forsake in this world, but also the greatness of the one we follow in this world. I want to expose what it means to die to ourselves and to live in Christ.” He says

I am convinced that when we take a serious look at what Jesus really meant when he said, “Follow me,” we will discover that there is far more pleasure to be experienced in him, indescribably greater power to be realized with him, and a much higher purpose to be accomplished for him than anything else this world has to offer. And as a result, we will all–every single Christian–eagerly, willingly, and gladly lose our lives to know and proclaim Christ, for this is simply what it means to follow him.

The fact is that there are multitudes of people who profess faith in Jesus Christ but who are not truly his followers. Platt wants his readers to be radical in their Christian commitment, but he wants them to ensure they have left behind the trappings of superficial religion for the joy of supernatural regeneration. He wants his readers to know that as we follow Christ, “he transforms our minds, our desires, our wills, our relationships, and our ultimate reason for living.” Once Christians have been transformed, they will inevitably begin to multiply, to make more disciples, both in their local context and across the planet. As with Radical, Platt’s particular concern is that North American Christians shake off their apathy and desire for comfort and take the gospel to the far corners of the earth. The call to follow Christ is a call to go wherever the gospel has not yet been preached.

Follow Me is essentially a brief theology of Christian living and mission, extending from the response to the gospel’s call to being the one to then extend that call to others. So many books of this kind come from outside of our theological stream, and it is almost as if we need to translate or contextualize them. Platt’s, though, is consistently biblical and gospel-centered in the best sense of that term. He does not introduce anything new or, dare I say it, radical to the equation (which I say as praise, not critique). He does not try to be clever or witty or original. He just teaches what the Bible teaches.

The book concludes with a “Personal Disciple-Making Plan.” Using a question and answer format Platt leads the reader to consider a plan to grow as a Christian and to make disciples. Here he addresses one of the critiques that came in the wake of Radical, that he had not given sufficient emphasis to the centrality of the local church in the Christian’s life. He has the reader ask:

He expands upon each of these questions and in doing so provides a helpful grid for living this life in a way that honors the Lord.

It sometimes seems as if books on a particular topic arrive in waves, and I suppose this is probably just the case. One bestseller may expose a lack of writing on a topic and many other authors respond. There have been several recent books that have a good measure of overlap with this one, emphasizing true conversion over cultural Christianity and emphasizing the importance of discipleship (Francis Chan’s Multiply comes to mind, as does J.D. Greear’s Stop Asking Jesus Into Your Heart). Still, this one is worth reading and worth handing out.

Though I would suggest that Follow Me is an objectively better book than Radical, my guess is that it will not sell as well. There is something about the call to be radical that appeals to us more than the call to simply follow. Yet this is the one I would prefer to hand out and the one I would prefer to have people read. It may not hold out the excitement and anticipation of doing something radical, but it does something far better and far more lasting than that–it calls us to follow Christ, to lose our lives for his sake. As Platt says, it is a call to die and a call to live. It is a call to die in order to really live.