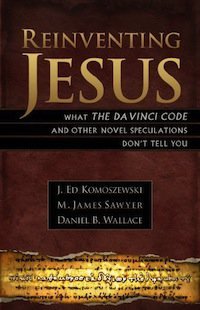 The Da Vinci Code, until recently the talk of the Christian world, seems to have rapidly become yesterday’s news. Though the book continues to sell and the film continues to draw, Christians seem to have lost interest. That is often the way things are in the church these days. Christians seems to react quickly and enthusiastically to a perceived threat, but these threats soon fade and Christians move on to other things. While many of these threats are merely perceived, some are genuine and have the potential to draw people away from the faith.

Reinventing Jesus seeks to answer the common lies and misconceptions that lie at the heart of most attempts to discredit the Christian understanding of Jesus. It is a collaborative effort between J. Ed Komoszewski, M. James Sawyer and Daniel B. Wallace, all of whom are graduates of Dallas Theological Seminary. While it was published, not entirely coincidentally, I’m sure, around the same time as The Da Vinci Code hit the big screen, it is wider in scope than merely responding to Dan Brown’s many spurious claims. For as the authors say, “Attempts to reinvent Jesus are nothing new. The vines of radical skepticism toward the biblical Christ have been creeping up the walls of the ivory tower for two centuries.” While this is certainly true, the authors also state that “only in recent years has such intense cynicism sprouted at the grassroots. And it has spread quickly.” These new and radical versions of Jesus have been widely promoted through the media so that the average person no longer has a strong conviction of what is true and what is false. “Distrust spawned in the media has taken firm root in our postmodern society, where the quest for truth has been replaced by a convenient tolerance for every idea. ‘That’s just your interpretation!’ has become the tired mantra of hurried people who can’t be bothered by a thoughtful evaluation of evidence. It’s simply easier to pretend all interpretations are created equal.” We now live in the midst of a culture of cynicism where we have all been conditioned to doubt.

And yet, there are some things that are true. And what’s more, they are verifiably true. Reinventing Jesus is an attempt to bring assurance where there has been doubt. Written to appeal to the motivated layperson, this book does not attempt to answer every reinvention of Jesus. Instead, the “primary objective is to build a positive argument for the historical validity of Christianity.” The authors build a progressive case which they feel both undermines the attempts to reinvent Jesus and underscores the enduring essence of the Christian faith. The case is built on the following questions:

The authors build their case logically and forcefully. They are certainly not the first to do this and they have much material to guide and assist them. And ultimately, it is simply not too difficult to prove that the writers of Scripture got the story right, that this story was copied faithfully, that the books of the Bible are the right books, that Jesus was considered divine even by the earliest Christians and that Christianity is not based upon pagan religions. The greater difficulty is in addressing the baseless claims of authors who seek to undermine the historical Jesus and in convincing people that it is possible to know the truth. In all of these areas, the authors do well. They move quickly from one point to the next, never becoming bogged down in details. They consistently write in such a way that a motivated layperson can easily follow their arguments. This book succeeds admirably in what it sets out to do.