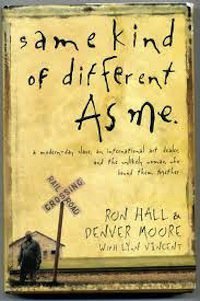 Buy from Amazon
At a recent conference I met a gentleman who happens to edit one of those airline magazines that always competes with your legroom in an airplane. A short time ago he sent me an email and asked if I had heard of a book called Same Kind of Different as Me and recommended that I read it. He seemed like a good enough guy and the book had a great cover, so I went ahead and ordered it sight unseen (or nearly so). And what a book it turned out to be.

Same Kind of Different as Me, a book that is factual but could just as easily be fiction, tells the unlikely story of the unlikeliest of friends–Ron Hall and Denver Moore. Told in two voices, the book alternates between telling the story from the perspective of Ron and Denver.

Ron Hall is a wealthy international art dealer who travels the world buying and selling rare and expensive works of art. He has grown rich but has also grown selfish and has grown away from his family. When Ron Hall reluctantly volunteers at a homeless shelter (at the insistence of his wife) he soon comes into contact with Denver, a man his wife is convinced is going to change the city. Denver grew up as a sharecropper in Louisiana, living a life that seemed little different from the life of his ancestors one hundreds years before. He eventually walked away from the cotton fields and found that, while life on the streets of Fort Worth was difficult, it was easier than being a sharecropper. It was here, in a homeless shelter, that the two men met, one serving food and the other being a reluctant recipient of this charity.

Chef Jim and Deborah chatted easily while I mentally balanced the ledger between pleasing my wife and contracting a terminal disease. I had to admit that his idea seemed like an easy way to start–serve the evening meal once a week, and we’d be in and out in three, four hours max. We could minister from behind the rusty steel serving counter, safely separated from the customers. And we could enter and leave through the rear kitchen door, thereby minimizing contact with those likely to hit us up for money. The whole arrangement seemed like a good way for us to fulfill Deborah’s desire to help the homeless without our touching them or letting them touch us.

Her bright laugh pulled my attention back into the room. “I think that sounds great, Jim!” she was saying. “I don’t see any reason why we can’t start tomorrow. In fact, let’s just say you can count on us to serve every Tuesday until you hear otherwise.”

“Praise the Lord!” Chef Jim said, this time giving Deborah a great big Baptist hug. It did not sound great to me, but Deborah had not asked me what I thought. She never did do much by committee.

At first unable to crack Denver’s stony personality, Hall eventually prevails and strikes up a friendship with a man worlds apart. They become fast friends who endure a tragedy together and who soon grow in their love, respect and admiration of each other. Each man teaches the other about life and faith. Somehow the story of the relationship between these two men is fascinating and inspiring. It offers a glimpse into two worlds that are nearly opposite and shows what happens when these worlds come into contact with each other. I can still hardly believe this was not a novel.

While the book showcases a fun sense of humor, there is also plenty of heart.

And yet for all the courage I knew she had, she had shown this glimmer of fear. Oh, how I loved her then. Fiercely. The passion you feel down in your guts where no one else can see and only you know its frightening force. I could remember that there were times in our nearly three decades of marriage that I had loved her less than at that moment, and guilt pierced me like a spike. Though she had always given unconditionally, I had often not been willing to do so in return, She has deserved better than she’s gotten from me, I thought, and nearly drowned in a wave of regret thirty years deep.

Between the heart and the humor is some good theology, but, unfortunately, also some that would require believing the word of the author rather than finding any basis in Scripture. For example, there is talk of a “visitation” where a dead person returns to earth, however briefly, to offer comfort and encouragement. This is not something the Bible tells us we can or should expect. There was also some theology that was suspicious and seemed to reveal an understanding of the gospel that was somewhat incomplete. I found these distracting and disappointing, but not fatal to the book.

So while Same Kind of Different as Me is not necessarily a book I’d recommend for its theology, it is a book that I’d recommend for a stirring and unforgettable story, and for the pure joy of reading it. This one caught me by surprise and I enjoyed every minute of it. I can pretty well guarantee that someone will buy the movie rights to this story, so why not buy it now so you can say that you read the book before you ever heard of the movie!