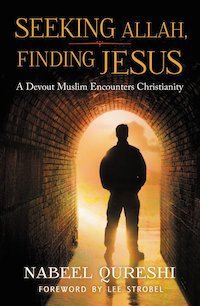 My wife became a Christian the first time she heard the gospel. It didn’t take years, or even months or weeks of soul-searching. It didn’t take a great pilgrimage or a critical analysis of the Bible’s trustworthiness or inerrancy. A very practical person who had been raised without reference to religion, she heard the gospel at the age of eighteen, understood that it made sense of the world and her life, and responded in faith. Since that time she hasn’t seriously considered reconsidering.

But not everyone’s journey is quite so simple or straightforward. We are all different people with a very different make up. Seeking Allah, Finding Jesus is Nabeel Qureshi’s story of how he became a Christian, and his story could not be more different from my wife’s.

Qureshi was born the eldest son of Pakistani immigrants and he grew up in America and the U.K.—wherever the U.S. Navy assigned his father. His parents were devout Muslims and wherever they went, they attached themselves to a mosque and to the local Islamic community. Qureshi grew up studying, understanding and loving the Koran; he performed his prayers just like every other good Muslim. His father was an amateur apologist for Islam, so he, too, grew up with an interest in defending his faith. He loved his religion in both its theology and its practice.

While Qureshi was in college he met David Wood, a young Christian man who, like him, was studying toward a career in medicine. The two became fast and dedicated friends, who loved and respected one another despite adhering to very different faiths. As their relationship continued, they became religious sparring partners, each testing and challenging the other.

His story is especially interesting and important in a few ways. First, he gives an insider’s perspective of the Muslim mindset. There are some unique challenges to reaching Muslims, especially in their understanding of authority and the difficulties they face in rejecting the faith of their families. Those who have the opportunity to share the gospel with Muslims will do well to read and consider these. He also discusses the vast difference between the mindset of first-generation immigrant Muslims and their children. Though the children are usually practicing Muslims, they are also Westernized and less tied to the tenets of the parents’ faith. Finally, he dispels some of the fear about radical Islam. His parents were devout, but not radical. In the aftermath of 9/11 they faced some measure of persecution despite despising and disavowing what the terrorists had done. Qureshi portrays his family as loving, kind and close rather than cold and domineering. This is very consistent with the Muslim families I know and admire today.

If I have hesitations about the book, it is largely in the area of extra-biblical encounters with the Lord. Qureshi describes several dreams or visions that played into his conversion and, while such tales are very common among former Muslims (Muslims, after all, regard dreams as especially important) it does seem to clash with his belief in the authority and even the sufficiency of Scripture. One could read this book and almost assume that the Lord may or will owe us dreams to help convince us of truth; yet God promises nothing more and nothing less than the Holy Spirit illuminating the Bible.