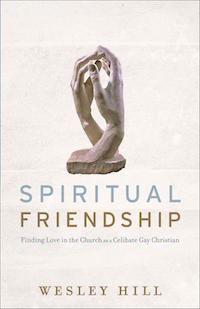 Have you ever had a friendship that entered into irrevocable decline because your friend just up and moved away? Have you ever had a friendship that ended over matters of convenience or preference? My guess is that most of us have experienced something like this at one time or another. And I wonder if this is an inevitable part of friendship, or whether it may just be a sign that we take friendship too lightly. Wesley Hill has been wondering the same and has written a thought-provoking book on the subject. In Spiritual Friendship he means to answer questions like these:

Should we think of friendship as based, above all, on personal preference? Should we think of it as preserving its voluntary character and thereby vulnerable at every point to dissolution if one of the friends grows tired of or burdened by the relationship? Should we consider friendship as always freshly chosen but never incurring any substantial obligations or entailing any unbreakable bonds? Or should we instead—pursuing a rather different line of thought—consider friendship more along the lines of how we think of marriage? Should we begin to imagine friendship as more stable, permanent, and binding than we often do? Should we, in short, think of our friends more like siblings we’re stuck with, like it or not, than like our acquaintances? Should we begin to consider at least some of our friends as, in large measure, tantamount to family? And if so, what needs to change about the way we approach it and seek to maintain it?

Hill comes at the subject from an interesting angle. He describes himself as a celibate gay Christian—a follower of Christ who fully believes that the Bible forbids homosexual behavior, but who cannot deny or destroy his homosexual orientation. (For the purposes of this review I would suggest we agree to bypass the discussion surrounding the validity and potential consequences of the term “gay Christian.” It is a term that concerns me in some ways, but I do not wish to miss out on Hill’s insights on friendship by focusing on his terminology.)

As a Christian man who feels no sexual or romantic attraction to women, Hill finds himself wondering if he is doomed to a life of loneliness. “I feel myself caught in a place of tension between my Christian faith and my sexual orientation that makes me particularly eager to cultivate close friendships but also especially fearful of not being able to find and sustain them.” He imagines a life where he is old and alone, where he has no one to celebrate holidays and special occasions, and, even worse, where he has no one with whom to share the beautifully mundane moments of life. And that raises questions: Where is he to find love, and where is he to give love? If he cannot have a husband or a wife, will he be forever cut off from all relational intimacy?

The solution, he believes, is friendship. And yet friendship has fallen on hard times. He presents several contemporary challenges to it: The perverse assumption that every significant male friendship points to hidden homosexuality; the insistence on the ultimate significance of marriage and nuclear family and its assumption that the closest bond we can ever experience must be with that of siblings, spouses, or children; evolutionary biology and psychology which leaves no room for a relationship that is lived for the good of another; and our culture’s obsession with the kind of freedom and autonomy in which a meaningful friendship simply exacts too high a cost to be worth the bother. “If your deepest fulfillment is found in personal autonomy, then friendship … is more of a liability than an asset.” Contra these challenges, Hill proposes a kind of spiritual friendship that has roots right in the Christian tradition.

In six chapters divided into two parts Hill explores the cultural background, history, and theology of friendship before focusing on practically living it out. He shares his own experience and his own search for significant spiritual friendship.

Interestingly, he finds more guidance from outside the Protestant tradition than from within it. He relies predominantly on pre-Reformation and contemporary Roman Catholic writers to guide him. Have Protestants, with all our emphasis on marriage and family, neglected friendship? It is very possible that we have. Meanwhile Roman Catholics, with their requirement for celibate clergy, may have had to think more about the boundaries of friendship and celibate same-sex relationships.

Without endorsing all of Hill’s sources or agreeing with every one of his conclusions, I still found several of his themes especially helpful.

First, it helped me grow in my sympathy for Christians who struggle with same-sex attraction. Hill shares experiences that may not have occurred to those who do not struggle in this way, such as a heterosexual same-sex friend eventually becoming an object of intense romantic attraction. He tells of his own experiences of inadvertently falling in love with one of his own friends and the disruption and heartbreak that this brought to their relationship.

Second, it made me want to be a better friend, and especially to those who find themselves in Hill’s situation (or one like it). I have thought too little about the challenges of those who rely on friendships for what so many of us gain through marriage or family. I know that I have not been the friend I could have been to so many brothers (and sisters) in Christ.

Third, it helped me think in fresh ways about friendship, and especially about the sheer significance of friendship. We all know that the strength of marriage is its bond, the commitment of one spouse to another through any and every circumstance, ’til death do us part. Is it possible that our friendships remain insignificant because they require so much less and can be dissolved on a whim? What if we were to heed Hill’s counsel and attach much deeper significance to friendship, even making major life decisions (such as accepting that job offer or retiring to a different state) with our existing friendships in mind? Could two friends actually pledge themselves to love and care for one another without it being either gay or weird? What could we gain in our friendships if we simply took them that much more seriously? As I think about these questions, I find myself wanting deeper and more meaningful friendships.

Hill says, “Friendship is a good and godly love in its own right, just as worthy of attention, nurture, and respect as any other form of Christian affection. That’s what the Christian tradition has mainly said.” And that is exactly what we would do well to consider with.