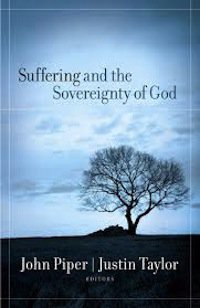 Buy from Amazon Buy from WTS Bookstore
It was an interesting experience reading Suffering and the Sovereignty of God (edited by John Piper and Justin Taylor), for only a year before its release I had been present at the Desiring God National Conference where the contents of the book were first presented as keynote addresses. With only a couple of exceptions, each chapter of this book is drawn from one of those speeches (those exceptions being Dustin Shramek’s chapter and an appendix entitled “Don’t Waste Your Cancer” which was initially written by John Piper when he learned of his prostate cancer and was subsequently added to by David Powlison when he was diagnosed with the same disease). I had, then, some familiarity with the material before I began to read it. I knew which authors would provide a theological framework for suffering and which would focus instead on their first-hand experiences of suffering. I even knew what most of the authors would say. Still, I enjoyed reading the chapters as much as I enjoyed hearing the speeches one year ago. I am sure I learned as much from them the second time around.

This is not a book that deals with suffering as an abstract principle. In the introduction Justin Taylor writes, “The authors do not write as mere theoreticians, waxing eloquent about abstract themes. No, this is a book of applied theology. Its theology has been forged in the furnace of affliction.” Of the contributors, two are paralyzed, two lost parents when they were only young, two have recently suffered the death of a child and two are even now battling prostate cancer. “The point of mentioning this is not to portray them as victims or to elicit your sympathy, but rather to reiterate that they are fellow soldiers in the battle, fellow pilgrims on the journey.” They are equipped to speak about suffering because they have suffered.

While it is by no means a requirement that the book’s chapters be read in order, those who do so will first find theology and then the practical outworking of that theology. The first part of the book looks primarily at God’s sovereignty in suffering. John Piper writes the first chapter, expounding “Ten Aspects of God’s Sovereignty Over Suffering and Satan’s Hand in it.” The impetus for this book and this chapter, he writes, “comes from the ultimate reality of God as the supreme value in and above the universe.” Over against a breed of evangelicalism that is increasingly shallow and inequipped to deal with difficult subjects such as suffering, Piper presents the absolute sovereignty of God, even in this. Following Piper is Mark Talbot who seeks out the gracious hand of God in the hurts others do to us. He answers the claims of Open Theists and others who seek to diminish God’s sovereignty, showing that, while God never does evil, He does ordain evil. He is sure not to let God off the hook for His role in suffering, for God does not want to be let off the hook.

To begin the second part of the book, which focuses on God’s purposes in suffering, John Piper writes two chapters, asking why God allows suffering. He looks first at the greatest act of suffering that can or will ever occur–the death of Jesus Christ. “The death of Christ in supreme suffering is the highest, clearest, surest display of the glory of the grace of God. … Suffering is an essential part of the tapestry of the universe so that the weaving of grace can be seen for what it really is.” Or, put most plainly and simply, “the ultimate reason that suffering exists in the universe is so that Christ might display the greatness of the glory of the grace of God by suffering in himself to overcome our suffering. The suffering of the utterly innocent and infinitely holy Son of God in the place of utterly undeserving sinners to bring us to everlasting joy is the great display of the glory of God’s grace that ever was, or ever could be.” In the following chapter he asks why God appoints suffering for His people and gives the following six reasons drawn from Scripture: suffering deepens faith and holiness; suffering makes your cup increase; suffering is the price of making others bold; suffering fills up what is lacking in Christ’s afflictions; suffering enforces the missionary command to go; and the supremacy of Christ is manifest in suffering.

The fifth chapter is written by Steve Saint, a man whose story has been told in venues around the world. He frames his speech around two events that caused him great suffering: the death of his father and the death of his daughter. Reflecting on these events he writes, “I don’t advocate that we look for suffering; life brings enough of it on its own. But what I do advocate is that suffering is an important prerequisite to ministering to hurting people. Christ took on our likeness and subjected himself to the suffering that plagues us.” In Christ’s willingness to suffer we see the value of suffering ourselves, for in our pain we can sympathize with others. Carl Ellis Jr. then writes about the sovereignty of God in ethnic-based suffering, encouraging Christians to demonstrate “the true meaning of ethnicity rather than imitating the world with ethnic power struggles, marginalization, and oppression. We need to glorify God by being on the vanguard of spiritual unity with ethnic diversity.”

The book’s final section focuses on God’s grace in times of suffering. David Powlison looks at how the grace of God meets us in our suffering. He structures this tender, pastoral chapter around the six stanzas of the hymn, “How Firm A Foundation.” Dustin Shramek’s contribution, entitled “Waiting for the Morning during the Long Night of Weeping” affirms the sovereignty of God even in the death of his infant son. He examines Psalm 88 which he considers the most discouraging chapter of the Bible for it is filled with pain and searching but ends without a move from pain and grief to joyful triumph. “He [the Psalmist] had not experienced the deliverance he cried out for. He was still just as discouraged then as he was when he began writing.” Shramek shows how this man’s experience was not unique and draws principles from it. The final chapter is written by Joni Eareckson Tada. She discusses a line from the film The Shawshank Redemption which says, “Hope is a good thing, maybe the best of things. And no good thing ever dies.” While admitting that hope can be difficult to find in tragedy, she affirms the importance of hope and shows how her life is marked with hope for the life to come.

Suffering and the Sovereignty of God continues the tradition of fine books based on keynote addresses at the Desiring God National Conference. Along with Sex and the Supremacy of Christ (my review), it is a compassionately biblical and pastoral examination of a difficult subject. Suffering is an experience common to all human beings and is an issue we all wrestle with at one time or another. This book provides encouragement that God is sovereign, that His purposes are being worked out in suffering, and that even through the darkest trials there is hope. I am confident that this book will be used by God to encourage many of His people, both those who have already suffered greatly and those who have not, but are seeking to equip themselves for the trials that are sure to come in this fallen world.