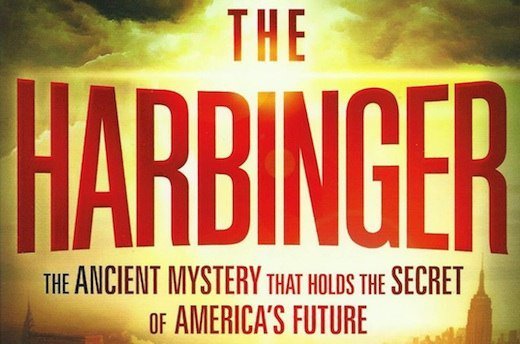 Is it fact or fiction? That is the question everyone asks when they first encounter Jonathan Cahn’s book The Harbinger. The answer is both, I guess–a little from column a and a little from column b. How about this: The Harbinger is meant to be fact presented in the form of a novel; in reality it is an unfortunate mixture of truth and error presented in the form of a script. Still with me?

What is demonstrably factual is that The Harbinger is a phenomenon. It has held steady for forty weeks on the New York Times list of bestsellers, selling over 700,000 copies through fifteen reprints. At the time I write this, Amazon ranks it #2 on their list of Christian fiction and #7 on their list of Christian theology. The book had largely escaped my view until the past few weeks when I received a series of emails from people wondering what it was all about. I finally caved and read it. Consider this more of an explanation of what it is than a thorough review.

I will get to the content in a moment, but first a word about the form. Though described as a novel, the book is actually far closer to a script (a script that would make an exceptionally tedious play or film). There is very little action, only the barest semblance of a plot, and no development at all of the three characters. Instead, the book is composed of amateurish dialog that proceeds at a plodding pace. The writing is repetitive to the point that it could easily have been boiled down to a third or a half of its current length. The book is a chore to read and, speaking personally, the end simply could not come too soon.

Within this work of fiction are claims that the author insists are factual, biblical, and of the utmost importance. He claims to reveal an ancient mystery that holds the secret to America’s future. Like so many other books, it claims that the truth has been hidden in the pages of the Bible until one man ferreted it out. It is essentially a long exposition of Isaiah 9:10: “The bricks have fallen down, but we will rebuild with hewn stones; The sycamores are cut down, but we will replace them with cedars.” More correctly, it is a dual exposition of this text, applying it both to ancient Israel and to contemporary America. A snippet of dialog will explain how this can be (and, undoubtedly, convince many of you to read no further):

“But what does America have to do with ancient Israel?”

“Israel was unique among the nations in that it was conceived and dedicated at its foundation for the purposes of God.”

“But there was one other–a civilization also conceived and dedicated to the will of God from its conception…America. In fact, those who laid its foundations…”

“No, long before the Founding Fathers. Those who laid America’s foundations saw it as a new Israel, an Israel of the New World. And as with ancient Israel, they saw it as in covenant with God.”

“Meaning its rise or fall would be dependent on its relationship with God. If it followed His ways, America would become the most blessed, prosperous, and powerful nation on earth. From the very beginning they foretold it. And what they foretold would come true. America would rise to heights no other nation had ever known. Not that it was ever without fault or sin, but it would aspire to fulfill its calling.”

“To be a vessel of redemption, an instrument of God’s purposes, a light to the world. It would give refuge to the world’s poor and needy, and hope to its oppressed. It would stand against tyranny. It would fight, more than once, against the dark movements of the modern world that threatened to engulf the earth. It would liberate millions. And, as much as it fulfilled its calling or aspired to, it would become the most blessed, the most prosperous, the most powerful, and the most revered nation on the earth–just as its founders had prophesied.”

Of course there is a “but” that follows. Just as ancient Israel turned its back on its covenant with God, so too has America. By doing so, America has called down God’s judgment.

Cahn sees the prophecy of Isaiah 9:10 as applying as directly to America as to Israel, and all because America is a second Israel, a second nation dedicated to God and set apart for her purposes. The purpose of The Harbinger is to unmask a series of nine omens which have been manifested in America since September 11, 2001. Just as God warned Israel and gave her specific warnings of impending judgment, God has now given America a similar series of warnings, all beginning with 9/11. The time of warning has now passed and all that remains is for America to make her choice: Will she return to the Lord or will she continue to wander? If she returns to the Lord by such tokens as returning the Ten Commandments to view in public squares and reinstituting prayer in public schools, she will once again receive his blessing; if she refuses, terrorism will increase and the nation will suffer a fate similar to Israel’s.

These omens are very obscure and, not unlike The Bible Code, visible only in hindsight and by stretching both Scripture and logic well past any rational limit. Time would fail me to trace each of those omens, how they are drawn out of that short text, and how they have supposedly been fulfilled in the US of A. In a sense, though, that is neither here nor there, because those omens depend upon supposing that America is a second Israel. That may sit well with some Americans (and probably not so well with the rest of the world), but it is entirely absent from the Bible. While a historian may be able to make a case that America was founded upon Scriptural principles, nowhere in the pages of the Bible are we told that America has any special standing in God’s eyes; nowhere are we given even the smallest hint that America is to be equated with Israel while England or Canada or Nigeria are not. Certainly we cannot reasonably read Isaiah 9:10 as if the original prophecy was meant to apply equally to Israel and America.

For the sake of time and space, I will forgo extensive discussion of the book’s errors. If you are interested in greater detail, you may like to visit this critical review.

Much like The Shack–quite an obvious point of comparison–Cahn displays the power of melding fiction and theology. What stood out to me as I read The Harbinger that perhaps was not quite so clear in The Shack, is that writing fiction allows the author to dictate his reader’s reaction. He can present a mundane fact and follow it with a gasp or an expression of awe as if the reader has missed the obvious importance. This is something Cahn does often and to his advantage. What seems like a great stretch in logic can be rationalized or given increased credence by a character’s excitement. It’s an effective tactic I hadn’t spotted before now. To be fair, unlike The Shack, this book contains a clear and substantial call to the gospel, definitely one of the few highlights and rather a rarity for a book that makes its way to the bestseller list.

It’s not that The Harbinger has nothing good to say, but that so many of even those good things are built upon a poor and even dangerous foundation. The book depends upon a fundamentally flawed way of understanding and applying the Bible, treating the Bible as a mystery to be solved rather than a clear and sufficient explanation of what we are to believe concerning God and how we can live in this world to his glory. There is no good reason to read or recommend this book.