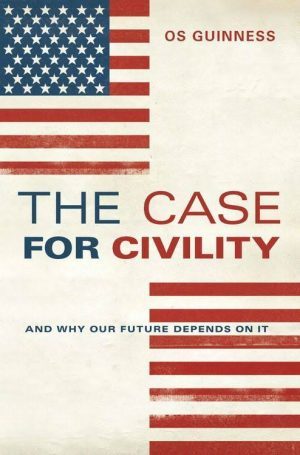 Buy from Amazon
“It would be a safe but sad bet that someone, somewhere in the world, is killing someone else at this very moment in the name of religion or ideology.” Thus begins The Case for Civility by Os Guinness. Every day the media brings us stories of death and mayhem and often religion and ideology are to blame. The bookshelves at your local bookstore are groaning under the weight of books by atheists—Hitchens, Harris, Dawkins—who blame religion for many of the world’s ills. But the record of nations that turned from religion have fared even worse. Guinness says, rightly I’m sure, that no question today is more urgent than this one: how do we live with our deepest differences—and especially our religious and ideological differences. This book is a proposal for restoring civility.

But it is deeper than that. It is a proposal for restoring civility first in America is a model for the rest of the world to follow. It is a call for the United States to take the lead in restoring civility. “The place at which we must begin to search for answers is the United States. Not because the problem is worse here than elsewhere—on the contrary—but because America has the best cultural resources, and therefore the greatest responsibility to point the way forward in answering the deepest questions.” America is uniquely equipped to take the lead and Guinness urges her on.

Much of the answer to whether or not we’ll learn to live with our deepest differences depends on rejecting two erroneous responses to the culture wars. First, we must say no to a “sacred public square”—a situation where one religion has a position of privilege or prominence that is denied to others. As he refutes the sacred public square, Guinness laments the state of the Religious Right and the damage it has done to faith in America. We must also say no to a “naked public square”—the situation where public life is left devoid of any religion. This is what is advocated by the new atheists. Both of these responses to the culture war are in contradiction to the Constitution.

The alternative to both is a “civil public square.” “The vision of a civil public square is one in which everyone—peoples of all faiths, whether religious or naturalistic—are equally free to enter and engage public life on the basis of their faiths, as a matter of ‘free exercise’ and as dictated by their own reason and conscience; but always within the double framework, first of the Constitution, and second, of a freely and mutually agreed covenant, or common vision for the common good, of what each person understands to be just and free for everyone else, and therefore of the duties involved in living with the deep differences of others.” If we are to have a civil society, we must first have a civil public square.

Anticipating an objection that is sure to arise, Guinness makes sure the readers knows that he is not advocating some kind of false tolerance, the likes of which is too often advocated in our society. The tolerance he advocates is true tolerance—one that understands and affirms that there must be differences. It does not seek to eradicate differences, but instead seeks respect despite differences. It is important to understand that “the right to believe anything” does not mean “anything anyone believes is right.” Though we need to respect a person’s right to believe anything, there are times that we have a right and a duty to disagree with them.

Guinness concludes the book with a short list of challenges—places to begin in the quest to restore civility. These are things society must do, but things that must be spearheaded by individuals just like you. As an afterword Guinness includes the text of the Williamsburg Charter which he helped draft.

A particularly interesting thing about this book is that it is written by a man who, by virtue of his British birth, is excluded from being a leading part of the solution. He can write and propose, but not act. What he proposes, he proposes to American citizens. Meanwhile, I read and reviewed this book from a Canadian perspective. And I agree with much of what Guinness states here. America, it seems to me, is the nation best equipped to champion and to model the restoration of civility. Though not revered as she once was, America continues to be a nation that is looked to with respect and which has a global presence. She is a nation who has the constitutional foundation to model a truly civil public square. But the question remains: will she show the way forward?