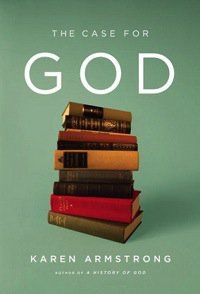 It is a rare occasion that I find it difficult to point out any redeeming features in a book-when I struggle to find a single positive to write in a review. Unfortunately Karen Armstrong’s The Case for God is one of those books-one that is so monstrously bad, so hopelessly awful, so wretchedly miserable, that it took concerted effort just to finish it. Heck, even the cover stinks-a pile of religiously-significant books hovering at a strange angle over a plain background. I tell you what: I will concede the font. The book is set in Granjon, a very nice, classical font that is very consistent with the earliest Garamond type faces. It is classy and classical but without being antique. But that is as good as the book gets.

I can save you thirty-five bucks and many hours of your life by telling you that 99% of what Armstrong has to say about God and religion she squeezes into the Introduction and the Epilogue, which together take up just 23 of the 340 pages of this book. There she spews forth what she really believes about God and those who seek to follow him. Though she writes about all faiths, she focuses almost exclusively on Christianity. The reader will learn, among other things: that nobody before modern times was foolish enough to believe that the Bible should be read as fact, as if the Creation account has any value beyond a mythological attempt to describe the world’s beginning; that the doctrine of the infallibility of Scripture was unknown until the 1870’s when Hodge and Warfield dreamed it up; that Socratic dialogue with atheists would help us understand how we can be more faithful believers in God; that truth is found not by understanding or believing, but by doing; that the purpose of religion is to discover new capacities of mind and heart; that the danger to religion and the danger to the world is not religious adherents, but fundamentalist believers-those who believe in the exclusivity of their faith and who fall into old beliefs such as the infallibility of their scriptures. And that is just a sampling of a mere 23 pages.

The rest of the book is an extended revisionist look at the history of religion in general and the Christian faith in particular. Armstrong seeks to show that the modern Christian God (I hesitate to capitalize God in the way she uses the name) is vastly different from the “unknown” God of pre-modern times. God was once mysterious and unknown, so transcendent, so other that people could not hope to really know who he is or how he acted. But then modernism had to come along and ruin a perfectly good deity by insisting that God could be known, that he even desired to be known. What the author believes we need to do, of course, is return to God as a mystery, to God as an unknowable force who combines the best of all the world religions. Along the way she pauses to offer a few words about nearly every religious leader and every philosopher who ever uttered God’s name. It is absolutely exhausting and, for simplistic old-school fundie Christians like myself, utterly exasperating. With her facts on the basics of the Christian faith so far from the truth and with her obvious bias, I actually found myself reading deliberately trying not to comprehend, not to retain, what she said. After all, having proven herself utterly untrustworthy in the basics, how could I trust her in anything else?

The Case for God, then, is in no way a case for the God of the Bible or, really, for the God of most other faiths. Rather, it is a defense of making the idea of God respectable again, even if it means radically changing what we mean by that name. It is an absolute mess and easily one of the most boring, most obnoxious books I’ve ever read.