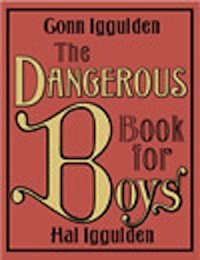 Buy from Amazon
Years ago I found a beat-up old box that contained a stack of musty books. I suppose they must have belonged to my father or grandfather and that they had long since been forgotten. They were interesting books, clearly targeted at boys of a different age. They had stories of pirates, heroic tales of valor and suggestions for activities that would appeal to any boy. It seems that books like this were all the rage once upon a time. Children needed to entertain themselves and this type of book gave them the suggestions they needed to keep busy.

The Dangerous Book for Boys looks just like those old books I uncovered. It is hardcover and over-sized with old-school gold printing on the cover. Even the inside covers are covered with that old marbled paper that used to adorn books. It looks like a relic of days gone by and that is clearly exactly as the authors want it. Already a runaway bestseller in Britain, the book has recently been Americanized and launched to great acclaim here in North America where the publisher expects to sell several million copies.

The book is for boys. Most girls will find little to enjoy and very little to inspire them. It is dangerous only to companies like Sony and Nintendo (and perhaps the occasional rabbit) as it teaches boys to love the outdoors and to use their imaginations to see the wonder of the great outdoors. It teaches them what they need to know to be busy, energetic, adventurous boys (which is exactly what God intends for boys!). The chapters read like a list of the things I loved to do and to read as a boy: How to Play Stickball; The Greatest Paper Airplane in the World; Fishing; Table Football; Secret Inks (and no, they don’t shy away from suggesting that urine is useful in creating secret messages); Extraordinary Stories; Skipping Stones; Juggling; Insects and Spiders; Books Every Boy Should Read; and on and on through 270 pages.

The following brief excerpts will serve to provide an idea of the content. The first two come from a section entitled “Essential Gear” which describes things an adventuresome boy will need to keep in his pockets at all times:

Handkerchief – “There are many uses for a piece of cloth, from preventing smoke inhalation or helping with a nosebleed to offering one to a girl when she cries. Big ones can even be made into slings. They’re worth having.”

Needle and thread – “Again, there are a number of useful things you can do with these, from sewing up a wound on an unconscious dog to repairing a torn shirt. Make sure the thread is strong and then it can be used for fishing.”

Later in the book is a section about how to hunt, clean and cook a rabbit:

This is not a difficult process, though it is a little daunting the first time. If you have a heavy-bladed cleaver, simply chop off the four paws. If you are stuck with only a penknife, break the forearm bones with a quick jerk, then cut the skin around the break in a ring. Remove the head in the same way. A serrated edge will cut through the bones, but a standard kitchen knife is likely to be damaged if used as a chopper.

The section discussing girls is not only filled with useful advice, but also downright hilarious. And, in fact, that quirky British humor is in evidence from the first to the last. Like most young boys, the book does not take itself too seriously.

Christian parents will want want to be aware of a couple of small concerns. When discussing ancient history and dinosaurs, the book turns, as we’d expect, to evolution as its explanation of the world’s origins. Also, while the list of suggested reading is really quite good, it does offer a handful of titles, especially for older boys, that may not be entirely appropriate (such as books by Stephen King). There are a few titles that wouldn’t top my list of recommendations. Finally, one of the suggested activities involves role playing games (with Dungeons & Dragons heading the list) and this may make some parents uncomfortable. There is no great cause for concern, though, as the book has far more positives than potential negatives.

Books like The Dangerous Book for Boys may be just the antidote we need to see boys begin to break the inactivity that seems to plague so many of them these days. There is something delightfully politically incorrect about a book with instructions on how to kill, skin and cook a rabbit. And for a boy, there is something delightfully challenging about trying it. Bound to be a popular gift item this Christmas (and probably this summer as well), I gladly recommend this book and trust it will drag many boys outside to enjoy the beauty and wonder of nature and to just enjoy being boys. Those childhood years don’t last long enough. This book is sure to create many great memories of those years.