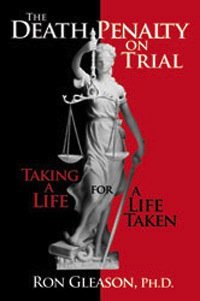 Buy from Amazon
That the Bible advocates and even commands the enforcement of the death penalty seems almost like it should be beyond controversy. The dignity God gives to humans, created as they are in his image, demands the utmost penalty for those who would recklessly and deliberately destroy life. Yet controversy abounds with many of those who profess Christ insisting that a God of love and justice would never endorse the use of this ultimate human punishment.

Into the midst of this controversy wades Ron Gleason, pastor of Grace Presbyterian Church in Yorba Linda, California in his new book The Death Penalty on Trial. Written primarily for Christians, so they can support the death penalty and do so coherently from moral, historical and biblical perspectives, this book offers a thorough defense of the death penalty and a defense against the arguments, both secular and Christian, so often lodged against it. Gleason sets the book firmly in the context of church history, looking first to the death penalty in history and then in the history of the church, showing how through the years the majority of Christians have believed that the Bible gives license to the state to execute those guilty of murder. He looks as well to the Old and the New Testament. Though it is difficult to deny that God supports capital punishment in the Old Covenant, many Christians have argued that it should no longer apply in the New. Arguing straight from Scripture, Gleason shows convincingly that this is simply not the case–the New Testament assumes capital punishment and insists upon the right of those in authority to enforce it. The government, after all, (as we learn in Romans 13) does not bear the sword in vain, but is the servant of God, an avenger who carries out God’s wrath on the wrongdoer.

Gleason dedicates a chapter to answering the objections of secularists and another to answer the objections of Christians (though, surprisingly, many of the objections are not far removed from one another). Writing as an American to a primarily American audience, he questions whether the death penalty can be considered cruel and unusual punishment and shows how the framers of the Constitution clearly believed in the capital punishment. He answers objections that the death penalty devalues human life (showing that, in fact, the opposite is the case) and that it has not been proven to be an effective deterrent (to which he responds, in part, that at the very least it is a deterrent to the one who has been executed). When looking to the arguments of Christians he answers objections that Jesus’ new ethics removed the need for the death penalty, that those who are forgiven by Christ ought to be forgiven by men and that the death penalty is an affront to God’s justice. In each case he answers well from Scripture or from plain reason. It bears mention here that Gleason is Presbyterian and at times his book is a little more Presbyterian-friendly than Baptist-friendly. This is to say that he would acknowledge a level of continuity between the Old Testament and the New Testament that many Baptists might deny. But though this may affect one or two of his arguments, it certainly does not detract much from the power of his arguments.

A theme that runs throughout the book is this: all murder is killing but not all killing is murder. Thus a person who murders another can be justly executed by the governing authorities without multiplying the evil. To kill a murderer is not to commit another murder. Rather, terrible though it is to have to take a life, it is an act of justice and a fitting penalty for one who would destroy a person made in God’s image.

This is the first book I’ve read by Gleason, an old family friend and my former pastor from his years ministering here in the Toronto area. I was impressed with the logic and the fluidity of his writing as well as with the power of his arguments. The book is well-researched and well-documented, drawing from a wide range of sources. And though, as a scholar, Gleason could easily have written an academic treatise, this book is suitable for the rest of us. His argument are as easy to follow and digest as they are to read. Though it deals with a niche topic, this book deals with an important one and I commend it to you.