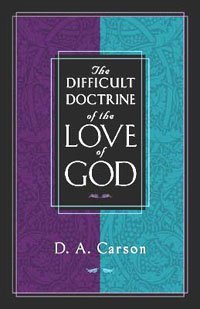 Until I read this book I would not have considered God’s love as a particularly difficult doctrine. The Trinity is a difficult doctrine to understand, impossible even. The eternal nature of God–that is another difficult or impossible one. But the love of God? I wouldn’t have thought of it as such. But this book convinced me otherwise.

Become a Patron
The Difficult Doctrine of the Love of God by D.A. Carson is just a short book (96 pages) that is drawn from four lectures he delivered in 1998. There was a small amount of editing performed, but the conversational nature of the speech carries through the text. It makes for an easy read, despite some deep theology.

Carson begins by outlining five reasons why this is a difficult doctrine. First, he suggests that while most people believe that God is a loving Being, this belief is set within a foundation other than Scripture. Second, many complementary truths about God are disbelieved by many within our culture (and our churches). Third, postmodernism reinforces a sentimental, syncretistic and pluralistic view of God. Fourth, the church has fallen into believing a sentimentalized version of God’s love that is not consistent with God as presented in Scripture. And fifth, the church portrays this as a simple doctrine and overlooks certain important distinctions that prove it to be difficult.

From this foundation, Carson builds the book around four themes: the distortion of the love of God; the fact that God is love; God’s love and God’s sovereignty; and God’s love and God’s wrath. As we would expect from Carson, he goes straight to the source–to God’s revelation of Himself in Scripture–to correct false assumptions and provide a deep discussion of what God’s love entails. He defends the compatibility of seemingly-opposite characteristics of God (that God can be perfectly loving and yet perfectly just in His wrath) and examines how God’s love interacts with His sovereignty in human affairs.

The only caveat I would provide with this book is that it does assume some knowledge of Christian theology since it was initially targeted at seminary students. For example, Carson discusses distinctions between Calvinism and Arminianism without first defining his terms. A basic knowledge of Greek would not hurt either, though it certainly is not necessary.

It is rare to find so much depth in such a short book. At the same time it is also nice to be able to learn so much without having to wade through hundreds of pages of text. This book could as easily have been hundreds or thousands of pages long. Carson does a wonderful job of highlighting the most important issues while confining himself to a limited word count. I highly recommend it.