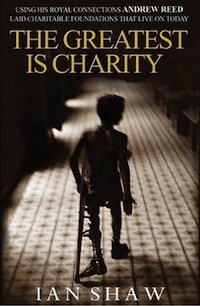 Buy from Amazon
“In a library archive in Surrey can be found the last words Andrew Reed ever wrote. They sum up his philosophy, that true gospel compassion, true gospel charity should look to the needs of the whole person; that individuals should be cared for holistically, both body and soul. They are words of Scripture written in a spidery hand with failing strength, but then underlined with a firmness and resolve showing that in his dying days his conviction and spirit were undimmed: ‘The greatest is charity.'” To Andrew Reed these words were more than a mere motto, but were words that drove his life.

That Andrew Reed’s name is not better known among Evangelicals is sad, yet it is probably exactly how he would have wanted it. A man of extreme humility, Reed dedicated all he did to the service of his Savior. He desired no praise and honor among men but only to serve the Lord.

Andrew Reed was both a philanthropist and a pastor who lived through much of the nineteenth century. He pastored a single church for fifty years, building it from a declining congregation of sixty to a thriving church of around two thousand. All the while he was engaged in establishing charities. In 1813, while he was still in his early twenties, he established the London Orphan Asylum and followed that in 1827 with the Infant Orphan Asylum. In 1847 he founded the Asylum for Fatherless Children and later in life the Royal Asylum for Idiots, and the Royal Hospital for Incurables. His charitable ministries were dedicated to extended help to the helpless, to those that society had chosen to overlook. These charities brought hope and life to countless thousands of men, women and children.

Dr. Ian Shaw does not, as so many biographies do, neglect the shortcomings of his subject. There were several occasions in Reed’s life where he allowed his enthusiasm to cloud his judgment and his biographer writes honestly about these times.

Andrew Reed was a godly man and one God saw fit to use in mighty ways. Reed’s legacy continues to live to this day as four of the charities he founded continue their work today, though in a form appropriate to our modern context. Evangelicals would do well to read his story and to learn from his example of putting his faith into action. The book closes with just this type of challenge.

Many of the needs identified and addressed by Andrew Reed have now diminished, or are met by government agencies. Yet the world remains a world of need. In Africa, there are now around eleven million AIDS orphans, calling for vast philanthropic work by enlightened individuals to provide orphanages for their care. Across other continents, millions of orphaned, unwanted or abandoned children live on the streets of major cities, pray to hunger, disease and exploitation for sexual purposes. Around the world, the need for enlightened, compassionate care for those with severe learning disabilities is as great as ever, as are the needs of those suffering from severe physical disabilities, or degenerative and terminal illness. In the face of such needs, moved by his Christian compassion, Andrew Reed would not have stood idly by.

This biography is well-written and, as with most biographies of great Christians, is inspiring. There is much that we can and ought to learn from Andrew Reed. If he is still a stranger to you, buy this book, read it, and get to know this great man of God. You will be better for it.