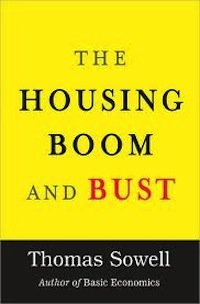 Buy from Amazon
At a time of global economic crisis, in all of the talk of a subset of that crisis, the housing boom and bust, it is easy to lose sight of the fact that the cause of that bust is so very simple. “Behind all the esoteric securities and sophisticated financial dealings are simple, monthly mortgage payments from millions of home buyers across the country.” When the housing payments slowed or stopped, sometimes by necessity and sometimes by choice, the boom turned to a bust. Real estate markets that had seen an unparalleled explosion of growth suddenly saw a catastrophic fall. Behind all the talk of stimulus and bailouts and increasing billions and trillions of dollars is normal people unable to make their $1000 or $2000 monthly mortgage payments.

In The Housing Boom and Bust, conservative economist Thomas Sowell looks to the housing bust and asks the simple, bedrock question: Why did so many monthly mortgage payments stop coming? His answer is as simple as it is lucid. The mortgage payments stopped coming in because during the housing boom, a time where interest rates were at historic lows, mortgages had been given to people whose prospects of repaying them were, at best, very poor. While the banks deserve some of the blame, they were in fact forced to hand out risky loans by government policies that imposed arbitrary quotas set by people whose concern was far more political than economic. These people, in the name of affordable housing and under the banner of political correctness, demanded that loans be provided to people who, under normal circumstances, could not afford them. This pressure caused financial institutions to hand increasingly “creative” (read: risky) mortgages to increasingly risky (read: poor) clients. When normal times resumed and interest rates rose, so too did payments. When payments rose, they became unaffordable and millions of people simply walked away, unable or unwilling to cover the new costs. “Why pay a $500,000 mortgage on a $300,000 home?”, they reasoned. Faced with a glut of foreclosures, banks began to offer homes at fire-sale prices, driving down costs across the market. The bubble burst, the banks began to fail and the government began printing vast quantities of money to stimulate the economy and to bail out the banks. The story continues.

In just 148 pages, Sowell explains where this crisis came from and the events that caused it all to come to a head. Along the way he powerfully exposes the cause of rising housing costs and the folly of affordable housing. As he has done repeatedly elsewhere, he exposes the fallacy of racism in lending institutions, showing that much of the blame must be laid at the feet of politicians. “Politicians in Washington set out to solve a national problem that did not exist–a nationwide shortage of ‘affordable housing’–and have now left us with a problem whose existence is as undeniable as it is painful.” Of course Sowell also proposes a way out of the mess and those who know him will not be surprised to learn that he lobbies for laissez-faire, allowing the economy to sort itself out without massive government intervention.

As he looks to the government’s reaction to the crisis, Sowell’s predominant concern is that the government, led by President Obama, will follow the words of chief of staff Rahm Emanuel, who said, “You never want a serious crisis to go to waste. … it’s an opportunity to do things you could not do before.” The government has an almost unparalleled opportunity to use this crisis to “fundamentally and enduringly change the institutions of American society.” Yet the reality is that, for all their flaws, these institutions have had an incredibly successful track record over the past two centuries, this crisis notwithstanding. “What is now being proposed is to jettison all that for the sake of untried theories, because of an economic situation that has arisen in a relatively few years as a result of government interventions with a terrible track record that have led to a crisis that now provides an opportunity for more of the same–in the name of ‘change’.” As the government increases its control over the American economy it essentially buys up the freedom of its people with their own tax dollars.

In The Housing Boom a Bust Sowell provides a plain-English explanation of the economic disaster and one that anyone can read, understand and enjoy. Though the book must have been written in a hurry, it shows none of the usual marks; instead, it is well-written and well-edited. Published just a couple of months ago but dealing with today’s issues, it reads almost like a newspaper or magazine article. If you, like me, have tried and failed to understand the cause of the crisis, this is the place to begin. Sowell is a steady and trustworthy guide.