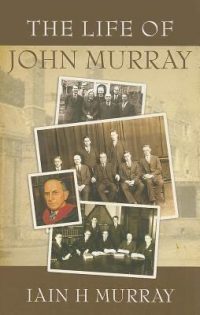 John Murray was born in 1898 Badbea, in Sutherland county, Scotland. Coming from the long line of Scottish Presbyterianism, Murray was trained from a young age to know and to treasure the Bible and the doctrine it contains. He served in the British Army in the First World War and soon after the war’s end took up studies in theology. He studied first at the University of Glasgow and then at Princeton Theological Seminary where he studied under such notables as J. Gresham Machen and Geerhardus Vos. In 1929 he was asked to teach systematic theology at Princeton and accepted on the condition that he would only have to teach a single year. His limited agreement was providential, for the next year many of the faculty members, in the face of the theological liberalism polluting Princeton, left to found Westminster Theological Seminary. Murray was soon encouraged to join the faculty at the new school and did so, teaching there until 1966.

He retired to his native Scotland where, at the ripe old age of 69, he married and soon became the father of two children. He died in 1975, leaving a rich legacy of orthodox theology and a life lived for the glory of God.

Originally published to accompany the four volume set of The Collected Writings of John Murray, this biography, weighing in at just over 200 pages, describes Murray’s life, focusing on his contributions to theological discourse, on his impact on his students, and on his relationships with other pastors and theologians. We’d expect nothing less than excellence from the pen of Iain Murray and he does not disappoint. The book deals well and deals fairly with this eminent theologian. It’s an interesting glimpse of a life of singular purpose and particular godliness. I am glad to recommend it.