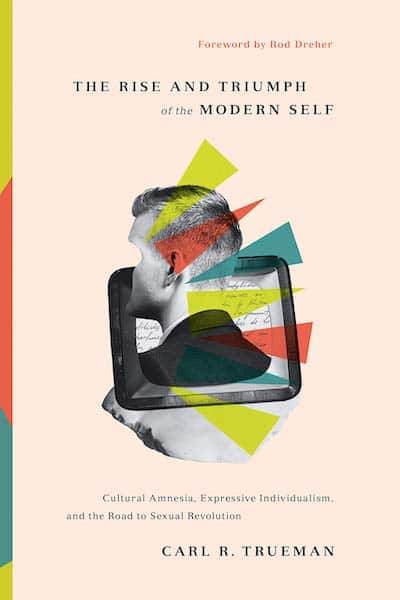 “I am a woman trapped in a man’s body.” While this is a phrase we have grown accustomed to hearing in recent years, it is a phrase that would have been incomprehensible to those who lived and died just a couple of generations in the past. While it is full of meaning today, it would have been void of meaning back then. So what has happened in recent decades to make that phrase make sense? What has happened to make it so normal that to deny it today is to be marked as a behind-the-times bigot?

The origins of Carl Trueman’s new book lie in his curiosity about how and why that very statement has come to be understood as both coherent and meaningful. The Rise and Triumph of the Modern Self is essentially a 400-page exploration of the Western world’s evolving understanding of the self. For as much as we might attribute the phrase to the sexual revolution, Trueman is convinced that the changes we have seen in sexual mores since the 1960s are symptomatic of the deeper changes “in how we think of the purpose of life, the meaning of happiness, and what actually constitutes people’s sense of who they are and what they are for.” To understand how a man can actually be a woman trapped in a man’s body we must understand “how and why a certain notion of the self has come to dominate the culture of the West [and] why this self finds its most obvious manifestation in the transformation of sexual mores.” With all that in place, the study could only be complete if it considers “what the wider implications of this transformation are and may well be in the future.”

Trueman divides the book into four parts. In the first he introduces basic concepts and key figures that will show up time and again. Central to his understanding of society’s changes are three philosophers: Philip Rieff, Charles Taylor, and to a lesser extent, Alasdair McIntyre. By examining their work he introduces concepts like “the triumph of the therapeutic,” “psychological man,” “anticulture,” and “social imaginary.” Each of these terms shows up again and again, so the reader would do well to read slowly and to jot down definitions.

Part 2 focuses on developments of the eighteenth and nineteenth centuries, beginning with Jean-Jacques Rousseau, then advancing to a number of prominent poets of the Romantic era. It turns finally to the world-changing ideas of Friedrich Nietzsche, Karl Marx, and Charles Darwin who each “in their different ways provided conceptual justification for rejecting the notion of human nature and thus paved the way for the plausibility of the idea that human beings are plastic creatures with no fixed identity founded on an intrinsic and ineradicable essence.” It is through these men that society’s notion of the self became psychologized.

Part 3 turns to Sigmund Freud through whom psychology become sexualized and his followers through whom sexuality became politicized. Freud taught that humans are, at essence, sexual creatures and, therefore, defined by our sexual proclivities. If before Freud sex was a matter of activity, after Freud it was a matter of identity. If before Freud sex was about doing what made you happy, after Freud sex was about being your authentic self. Those who advanced Freudian thought—Wilhelm Reich, Herbert Marcuse, and others—did so through a Marxist framework that saw traditional sexual norms as marks of an oppressive patriarchy bent on maintaining its own power. To resist the patriarchy would require total sexual freedom and self-definition. If through Rousseau identity became psychologized, then through Freud psychology (and thus identity) become sexualized, and through Reich and Marcuse identity (and thus sex) became politicized.

With this framework established, the book’s final part shows how all of these conceptual developments have played out and are currently playing out in society. It examines the triumph of the erotic through surrealism, pop culture and pornography; it examines the triumph of the therapeutic through Ivy League schools and Supreme Court rulings; it examines the triumph of the T (Transgenderism) as a near-complete overthrow of all traditional understandings of sex, sexuality, and even humanity. “Transgenderism is a symptom, not a cause. It is not the reason why gender categories are now so confused; it is rather a function of a world in which the collapse of metaphysics and of stable discourse has created such chaos that not even the most basic of binaries, that between male and female, can any longer lay claim to meaningful objective status. And the roots of this pathology lie deep within the intellectual traditions of the West.”

While The Rise and Triumph of the Modern Self is a demanding read, especially for those of us for whom many of these categories and characters are unfamiliar, it is a rewarding read. In its pages Trueman aptly explains how and why our culture has arrived at a place where “I am a woman trapped in a man’s body” is no longer nonsensical, no longer self-contradictory. And it begins to explain what is at stake if this long march is not interrupted, not refuted according to truth. As I see it, The Rise and Triumph of the Modern Self is not only the most important book I’ve read in 2020, but also the best. I can’t recommend it too highly.