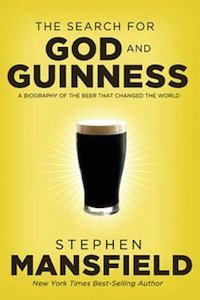 Now that I pause to think about it, I don’t know that I’ve ever blogged about the always-contentious issue of the consumption of alcohol. If you must know, I don’t touch the stuff but that is more out of preference than conviction. I just can’t stand the taste of alcohol in general and beer in particular. But I have no moral qualms with those who drink in moderation and am actually quite pleased to see a general drift in that direction amongst evangelical Christians. It is a sign of the times, I think, that a Christian publisher would print a book about beer.

In The Search for God and Guinness author Stephen Mansfield offers “A Biography of the Beer that Changed the World.” If there is hyperbole in that subtitle, it is only slightly so. One of the world’s most successful brands of beer for almost 250 years now, Guinness has a long and dignified history as both a product and as a company. Today more than 10 million pints are consumed every day. What many people do not know is that the company has long been a force for social good and that the Guinness name has created a long line of faithful men who have served the Lord even while brewing their beer.

This biography is told from the perspective of an author who is searching for the history of a company and seeking to learn about the men who have led it. He quite often turns to the first person perspective and includes photographs of himself in various significant locations. It is, then, something of an informal biography if, indeed, it can be considered a biography at all. Given the subject matter, such a casual format works quite well.

Of all the Guinness’s Mansfield introduces in this book, it was Henry Grattan Guinness that I most enjoyed reading about. He was a grandson of Arthur Guinness, the man who founded the original brewery (and, if I have my facts straight, great-grandfather of author Os Guinness). Henry was a preacher and one of the foremost evangelists of the awakenings and revivals that occurred in the middle of the nineteenth century. His name was often mentioned alongside the likes of Moody and Spurgeon. He knew Hudson Taylor and even offered to serve with him in China before eventually founding the East London Missionary Training Institute which trained and sent missionaries overseas. He was, by all accounts, a godly man and one the Lord used greatly in his service. He is a man I would love to know more about.

Many of the other Guinness family members are likewise interesting for one reason or another. Some were politicians, some were philanthropists, many remained in the family business, growing it into a worldwide phenomenon. Arthur Guinness, the founder of the company, began the very first Sunday schools in Ireland and championed social causes such as a ban on dueling. Henry Guinness wrote a book predicting not only the end of Ottoman control of Jerusalem in 1917 but also the restoration of Israel in 1948. They were and remain, from top to bottom, a fascinating and exceptional family.

So I suppose the beer, the product for which the family has gained notoriety, is only a small part of the story. The brand continues to grow and continues to thrive; it continues to be a favorite beverage for millions. And yet, when all is said and done, there are other contributions by the Guinness family that seem sure to last far longer than the beer.

Let me be honest and say that this is not the best “biography” you are likely to read this year. While largely well-written, it still offers quite a cursory look at many different people, providing more of a snapshot of the Guinness family than a serious evaluation of any one of them or of the product they created. Nevertheless, what it does, it does quite well. It’s certainly an enjoyable read, even if not a life-changing one. Why not grab a copy this summer and enjoy it out in the sun, with or without a Guinness in-hand.