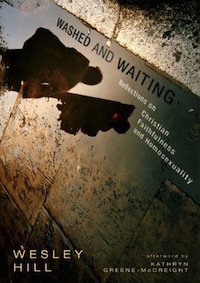 Wesley Hill has had to engage this issue in a far more serious way. Hill is a Christian and he is gay. Now I know many will get no further than this phrase: gay Christian. Hill uses that phrase as a kind of shorthand to express that he is a Christian–an evangelical who holds to the tenets of the Chrisitan faith, but he is also a man who is homosexual in what seems to be his natural orientation or inclination. He has always been attracted to men and only men. He has remained celibate through all his life, convicted and enabled by the Holy Spirit not to act out his sexuality. But hope and pray as he might, he cannot change his inability to be attracted to women. I am not crazy about the phrase gay Christian, but will use it in this review while adding it to my growing list of things to think about in the future.

Washed and Waiting: Reflections on Christian Faithfulness and Homosexuality is his attempt to answer some of the most difficult questions, and to answer them not in an abstract sense, but from the perpsective of someone who has labored over them and shed many tears along the way. What does it mean for gay Christians to be faithful to God while struggling with the challenge of their homosexuality? What is God’s will for believers who experience same-sex desires? How can gay Christians experience God’s favor and blessing in the midst of a struggle that for many brings a crippling sense of shame and guilt? These are the questions the church needs to be willing and equipped to answer. We have to be able to do better than “Homosexuality is wrong.” And that’s what this book is all about.

Hill maintains throughout the book that homosexuality is a result of the Fall. Never does he soften this or backpedal on it. Never does he seek to excuse his inclination to homosexuality anymore than he’d downplay any other sin. What I most appreciate about Washed and Waiting is his ability to take us inside his struggle. We all have sins we struggle with; we all have what seem to be besetting sins. Why should we read a book about those who naturally tend toward homosexuality instead of those who naturally tend toward lying or cheating or some other sin? I would answer that in two ways. In the first place, issues of sexuality and sexual identity strike very, very close to the core of a person. A person who is drawn to shoplifting does not self-identify as a thief. That is not his identity. But a person who is homosexual truly does identify that way. It is a major part of who he is. And hence it is a very difficult sin to deal with. In the second place I would say that society is feeding all of us, those who go to church and those who do not, all kinds of false messages about homosexuality and we need to be equipped to respond in a robust way–in a way that shows we truly understand the issue on more than a surface level. This isn’t about yucky sexual deeds–the “yuck factor” (a term that I believe was first coined by C. Gerald Fraser in the early 80’s). It is about people made in God’s image who seem to have a part of their core identity that through the reality of sin is just plain miswired.

Let me share just a few poignant parts of the book:

To say no over and over again to some of my deepest, strongest, most recurring longings often seems, by turns, impossible and completely undesirable. If a gay Christian’s sexual orientation is so fixed and ingrained that there seems to be little hope of changing it, should he or she really be expected to resist it for a lifetime?

What other group in contemporary society does the church confront as directly and sharply as it does homosexual people? Heterosexuals are at least given the option of marriage and thus the possibility of having their sexual urges satisfied. For homosexual Christians, there is no such possibility.

When we homosexual Christians bring our sexuality before God, we begin or continue a long, costly process of having it transformed. From God’s perspective, our homoerotic inclinations are like the craving for salt of a person who is dying of thirst. Yet when God begins to try to change the craving and give us the living water that will ultimately quench our thirst, we scream in pain, protesting that we were made for salt. The change hurts.

While those in the grip of Christ’s love will never experience ultimate defeat, there is a profound sense in which we must face our struggles now knowing there may be no real relief this side of God’s new creation. We may wrestle with a particular weakness all our lives. But the call remains: Go into battle.

I particularly appreciated Hill’s comparisons of homosexuality and singleness. After all, for the homosexual who is a Christian seeking to live in a God-honoring way, he has been called to a life of singleness. This puts him in a category with many Christians who desire relational intimacy, who desire sexual intimacy, and yet who have to deny themselves these things simply because it seems that God’s plans do not include them. And in that way, his struggle may be quite similar to another single person–one who does not necessarily feel called to a life of celibate singleness, but one whom God has not blessed with a spouse. Of course there are still differences; a heterosexual may hold out hope that he will meet a member of the opposite sex with whom he will fall in love; the homosexual, unless his desires are changed, will never have that opportunity. This brings about a deep loneliness and a deep lack of fulfillment. Just recently I was speaking to a pastor who has a man attending his church who appears to have been saved, and yet this man, homosexual but celibate, continues to live with his “husband.” While he is able to forego sex for the sake of his commitment to Christ, he cannot bear to part with the man he has shared his life with. I trust that eventually God will allow him to sever this relationship, painful though it may be. But once more, it points to one of the deep and difficult issues that we tend to ignore when we think about homosexuality.

While Hill does not deny the reality that God does at times choose to change a homosexual’s orientation, in many cases, and in his case, God has not done so. He longs to be attracted to women and some of his desires here are nearly heart-rending to read. And yet the fact remains that he simply is not attracted to women and has been unable to remedy that.

In this book Hill offers deep reflections from three people–himself, Henri Nouwen and Gerard Manley Hopkins. Both of those other men were apparently homosexual and both wrestled deeply with their sexuality, eventually choosing not to practice homosexuality. Of course the other thing that is true of those men is that they were Roman Catholic. Hill, then, necessarily draws upon people, mentors of sorts, whose understanding of the gospel would be far different than what evangelicals would hold to. I was a little disappointed to see his reliance upon these men and yet it made me think that this may be one more way in which evangelicals have probably been less than exemplary: there are few who have been willing to reveal their deep-rooted struggles with their sexuality. I could be wrong here, but it seems that a man seeking to reconcile Scripture and a homosexual orientation may find few other mentors.

It may be that this book’s greatest strength is its ability to take us deep inside the struggle. Those of us who have never struggled with this sin have probably never considered all of the difficulties that come with it–all of the feelings of guilt and shame, remorse and hopelessness. 1 Corinthians tells us that when one member of Christ’s body suffers, all suffer together. This book invites us into the suffering experienced by some of our brothers and sisters. There are things I wish Hill had done better, times I think he could have addressed issues differently, but his book remains powerful, always looking to Scripture, always seeking God’s will.

At the end of it all (160 pages or so) we are left with Hill calling on gay Christians to remain committed to celibacy and to find fulfillment not in pursuing their bodily desires, but in pursuing Christ. I was glad to see him point to the power of the local church in finding the kind of relational fulfillment that so many homosexuals are simply unable to find in other ways. He points to the power of the Holy Spirit working through the Word and working through the church, he points to the tough reality that life on this side of eternity may offer no transformation of desire. And yet he declares the truth that any of us, including gay Christians, live in this world washed and waiting–free from the guilt of sin, from the stain of sin, while eagerly awaiting the day when all is made new.

Washed and Waiting is by no means the final word on this topic and it is marked by a few weaknesses. But I do consider it quite a valuable read, predominantly for the diagnosis and to a lesser extent for the suggested cure. It speaks of an issue that Christians just can’t afford to ignore.