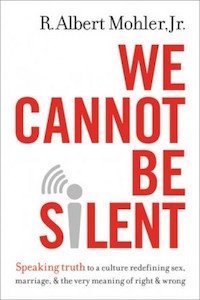 It takes no courage to write a book that simply drifts and bobs along in the cultural mainstream. It takes no courage to say the things that are already popular in the world around us. But to stand firm on ideas, on truths, that people despise—now, that takes courage. In that way Albert Mohler’s We Cannot Be Silent is a genuinely courageous work. It closely and critically examines the defining moral issues of our day—sex, gender, and sexuality—and stands firm on the unpopular, traditional, biblical viewpoints.

Mohler begins by positing “The Christian church in the West now faces a set of challenges that exceeds anything it has experienced in the past. … This is a revolution of ideas—one that is transforming the entire moral structure of meaning and life that human beings have recognized for millennia.” Some might accuse him of exaggeration, but I believe he is exactly right. We are caught up in a full-out moral revolution that is changing everything. “This new revolution presents a particular challenge to Christianity, for a commitment to the authority of Scripture and to revealed truths runs into direct conflict with the central thrust of this revolution.” As Christians come into conflict with the revolution, they will inevitably come into deep conflict with those who are swept up in it. “The moral revolution is now so complete that those who will not join it are understood to be deficient, intolerant, and harmful to society. What was previously understood to be immoral is now celebrated as a moral good.”

We Cannot Be Silent is Mohler’s attempt to speak truth into this moment of crisis. He does so with boldness and conviction. He looks first at the cultural shifts that preceded and birthed this revolution. Then he shows what the Bible says about sex, gender, and sexuality. He lays out the current and future challenges to the church. He concludes with brief answers to thirty challenging questions: The biblical authors did not have the category of orientation, so aren’t they talking about something different than we are? Is homosexual sin worse than other sins? Are people born gay? Should a Christian attend a same-sex wedding ceremony? Can a person with same-sex attraction change his or her orientation? If so, how?

The chapters that may bring the most unique value are the ones that trace the history and growth of this revolution. Most of us see how it is playing out around us today, but few understand how we got to this point. Mohler proves that any consideration of the rise of same-sex marriage must first look to other developments that have rocked society and set the stage: birth control and contraception, divorce, advanced reproductive technologies, and cohabitation. Marriage, gender, and sexuality would not be up for redefinition today without these four prior developments. And then he shows how there really was a gay agenda that was very successful in transforming society’s understanding of sex and sexuality. He explains the rise of transgenderism and shows that redefining marriage is actually obliterating marriage. Only when he has explained this revolution in the light of history does he advance to the present and future.

While the book’s subject matter is unsettling and even discouraging, Mohler leaves the reader with hope. “As a historian and theologian, I submit that the church has often been most faithful during times of exile and cultural marginalization.” The Bible promises that Christians will be strangers and exiles on this earth, so we should not be surprised at the current and coming state of affairs. Rather, we should see it all as an opportunity in which the gospel will shine brighter than ever in contrast to the darkness around us.

We Cannot Be Silent is an important and timely work that addresses urgent matters, and Mohler serves as a trusted guide to many of our deepest, most difficult, and most perplexing questions. The book will equip you to better understand this world and to live as a Christian in it.