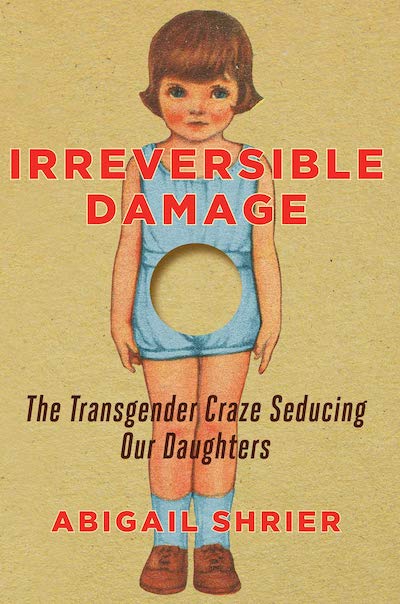 When historians look back on the twenty-first century Western world, surely few things will strike them as being more deranged and more sinister than its insistence that biology has no bearing on an individual’s gender. While society has long acknowledged the rare existence of gender dysphoria, a psychological condition marked by discomfort with one’s biological sex, it now celebrates full-fledged gender fluidity. Only our contemporary context could make sense of a phrase like “some men get periods” or a headline like “Man Gives Birth To Healthy Baby.” Only it would know what to do with words like “chestfeeding” and terms like “preferred pronouns.”

As transgenderism has become normalized and lauded, its demographics have shifted substantially. Once the near-exclusive domain of men, it is fast becoming dominated by young women. Abigail Shrier noticed this trend, was concerned by it, and decided to explore it. It resulted in her new book Irreversible Damage: The Transgender Craze Seducing Our Daughters (which, I should point out, is a general market book and not a Christian one). In the last decade, she says, “the Western world has seen a sudden surge of adolescents claiming to have gender dysphoria and self-identifying as ‘transgender.’ For the first time in medical history, natal girls are not only present among those so identifying—they constitute the majority.”

What could possibly have happened to bring about such a shift and to convince so many young women that they have been born into the wrong bodies? Shrier wanted to find out, so committed herself to research that included conducting nearly two hundred interviews and speaking to around 50 families of adolescent girls. Because gender dysphoria has been known to typically first present itself in early childhood, she relied most heavily on parents since they could best answer whether their daughters had always exhibited symptoms of dysphoria or whether it manifested itself only when they were tweens or teens.

The subtitle of her book hints at her findings. Transgenderism, she came to believe, is a kind of craze that is seducing young girls who are not clinically dysphoric. Adolescents are particularly uncomfortable with themselves and particularly prone to suggestions. In today’s context they are prone to the suggestion that their discomfort may stem from being a boy trapped in a girl’s body. This never would have occurred to girls in previous generations, but today’s media and classrooms dangle it as a possibility or even probability. Meanwhile the forces of intersectionality attach great social cachet to transgenderism so it can allow a girl to be catapulted from invisibility to prominence. The forces are strong.

Those who decide to make the leap find support in schools and universities, therapists and physicians. They find heroes, gurus, and instructors on YouTube. With or without the consent of their parents they can change their names and pronouns, obtain a “binder” to flatten their chests, take medications to delay puberty, begin testosterone to masculinize their development, have their breasts removed, or even take the final step and have their genitals reconstructed through phalloplasty. Even some of the most moderate of these measures can have long-lasting physical and fertility effects and be permanently disfiguring. Yet some girls begin such a course of treatment when they are still merely children.

Shrier begins by introducing some of the girls who have been swept up in this craze and telling their stories. She attempts to get to the bottom of the puzzling data showing that there has been a sudden and dramatic rise in girls claiming to have gender dysphoria and seeking treatment for it. She speaks with transgendered influencers who use social media to broadcast their experiences and encourage others to follow suit. She interviews the moms and dads who are unconvinced by their daughters’ self-diagnoses and the counselors and psychiatrists who are not. She spends time with some of the experts in the field who stand as dissidents and who have been pilloried or even “canceled” for it. She researches and describes the different hormonal courses and physical treatments that lead to the transformation of healthy female bodies into masculinized (but still female) ones that are often far less healthy. She writes about girls who regret the measures they took and the irreversible damage they inflicted upon themselves. She shows that most of today’s transitioning girls don’t truly want to be men as much as they don’t want to be women or to display feminine traits, as if there is something intrinsically bad or essentially weak about being a woman. It’s all very sad and very alarming.

Shrier writes as one who is sympathetic to people who have diagnosable gender dysphoria and for such people she affirms their decision to transition. But she is dismayed that ideologues have made transgenderism a valid and desirable option to those who are not truly diagnosable. She laments the way it has spread among young women as a kind of social contagion. She fears that many of them will go on to have regrets but be left with permanently damaged bodies. She makes the compelling case that a generation of girls is at risk, that their parents need to be aware of the pressures on them, and that society as a whole needs to act to protect those who are so very vulnerable. Irreversible Damage is a book that may prove particularly valuable to parents, pastors, and anyone charged with overseeing and caring for young women.

(Note: While the book is not explicit or profane, it does contain some bad words as well as discussions of sexuality.)