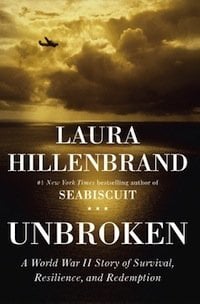 Buy from Amazon
The book is always better than the movie, right? It seems that way to me, even with movies as good as the Lord of the Rings series. The movies were amazing, but the books were still better. It seems inevitable that Unbroken will appear on the silver screen before long (and, if the rumors are to be believed, it will star Nicholas Cage). Before it does, make sure you read the book. Unbroken is, in a word, amazing–easily one of the best books I read in 2010. It’s written by Laura Hillenbrand who also penned Seabiscuit. This new book has shot straight to #2 on the New York Times list of bestsellers just days after its release.

Unbroken tells the tale of Louie Zamperini, a character who is so much larger than life that I can’t believe I hadn’t encountered him before. Zamperini grew up in California in the 1930’s, a troublesome kid who was constantly stealing, constantly fighting, constantly getting into trouble. He was that kid, the kid who was known by the police, the kid who was every teacher’s nightmare. He was also lightning fast, eventually becoming a member of the 1936 U.S. Olympic team where he ran the 5,000 meter race and even had the opportunity to meet Adolf Hitler.

War came in 1941 and, like so many men his age, Zamperini joined up, enlisting in the United States Army Air Force. He was made bombardier in a B-24 bomber and posted to Hawaii. He took advantage of all the world had to offer, drinking and carousing with the best (or worst) of them. On May 27, 1943, while searching the ocean for a crashed plane, his own plane suffered mechanical failure and plunged into the ocean. Zamperini survived the crash along with two other members of the crew. They were adrift in the Pacific for 47 days, living off whatever rain fell from the sky and whatever food they could somehow pluck from the ocean. Though one of the men eventually succumbed to starvation, the two who remained were eventually “rescued” by the Japanese Navy, some 2,000 miles from where the plane had crashed.

Zamperini’s war was about to get far worse.

While in captivity he was treated barbarically, a human guinea pig for new medications, a punching bag for sadistic guards, a slave laborer. In one camp he fell under the eye of Sergeant Matsuhiro Watanabe, one of Japan’s most notorious war criminals and a true sadist who beat Zamperini near the point of death time and time again. That he survived the camp at all is not far short of a miracle. But he did survive, right to the end of the war. Though just a shadow of the man he was before, he returned to the United States. He was consumed by hate and anger, haunted by the shadows of what he had gone through and, as with so many survivors of the Prisoner of War camps, he turned to alcohol to numb the pain. He got married but found himself turning on his wife, even physically at times, and he found himself deeper and deeper in the bottle. His life unraveled even further.

Let me pause here. If you already know that you want to read this book, just stop now and buy yourself a copy. Quit now before you come to the real spoilers. Do take note of this caveat: This may not be a book to give to your kids. There is some profanity used in dialog and there is the ugly truth that one of the Japanese prison guards was a sexual sadist who seemed to find sexual pleasure in beating and demeaning his prisoners. The sexual component of that sadism is not discussed in detail, it is not really qualified, but it is mentioned. The profanity and the sadism are historical, so not entirely out of place. But I do want to make you aware of them.

You can buy Unbroken at Amazon, in hardcover or on the Kindle. It will make a great gift for a lover of biography or a person who has an interest in history, and especially military history.

Now, for those who haven’t run out to buy the book already, let me tell just a bit more about Zamperini’s life.

Zamperini pretty much hit rock bottom right around the time that Billy Graham began a crusade in California. Zamperini’s wife had decided to divorce him, having come to the end of her ability to put up with his drunkenness and his abuse. But a neighbor persuaded her to go to the crusade and on her first night there she got saved. Soon she and the friend persuaded Louie to come along as well. The first night he stormed out in anger. The second night he began to storm out in anger, but on his way out, turned back and responded to the altar call. He got saved too. And his life was utterly transformed. He eventually returned to Japan to preach the gospel, even sharing it with some of the men who had imprisoned and abused him.

And here he is, decades after the war, still alive, suddenly coming into the limelight once again. And here, perched near the top of the New York Times list of bestsellers, is a book that tells a story of a marvelous transformation, of God’s stunning saving grace extended to one of his children. It’s almost too good to be true.

What can I do but recommend this book? It is receiving near-universal acclaim and for good reason. It’s an incredible story to begin with, and it only gets better as it goes along. The climax of the story is not when Zamperini is rescued or when he exacts revenge on his captors. The story hits its climax right where Zamperini is born again, where he lets go of the anger and instead finds himself overwhelmed with love, God’s love, and wants nothing more but to share that love with those who hated him. It’s a story that has waited a long time to be told; it’s a story that just needs to be read.

(Note: You may also like to buy Zamperini’s autobiography, Devil at My Heels. I would read Unbroken first and then read at least the final few chapters of Devil at My Heels where he fills out some of the details of his Christian ministry)