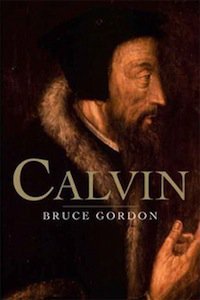 Buy from Amazon Buy from WTS Bookstore
It is here at last. For years now I have been waiting for a great biography of Calvin–the kind of biography which I would recommend without hesitation for those who would want to learn about the life of the great Reformer. In a year that has seen the arrival of at least half a dozen biographies of Calvin, this one, I believe, stands as the best. Written by Bruce Gordon, professor of Reformation History at Yale University, it is titled simply and properly, Calvin.

Biographies of figures as controversial as John Calvin tend to be written by unabashed fans or ardent enemies. There is a lot of biography that reads like hagiography and a lot that reads like pure slander. This was the case with Calvin himself and his earliest biographers–either they were his closest confidants, singing his highest praises or they were men who feared and despised him, fabricating outrageous charges against him (such as Jerome Bolsec who, ten years after Calvin’s death, wrote an account of the Reformer’s life in which he accused him of sodomy and suggested that he had died from crab lice). Even today, many of the biographies seem to focus undue attention on Calvin’s great accomplishments without wrestling with his notable faults and foibles. This new biography is an exception as Gordon writes from a position of notable objectivity. He seems a little bit detached from his subject, almost as if he has had to become a somewhat-grudging admirer of Calvin through immersing himself in the man’s life. Throughout the book he is willing to credit Calvin for what he did so well but he is also willing to call a spade a spade, whether that means pointing out pride or temper or youthful arrogance.

The greatest strength of Calvin may be the author’s deep knowledge of the time in which his subject lived. He sets Calvin firmly in his political, religious and cultural context, expending great effort in showing how Calvin was, in so many ways, a product of his time. This allows Gordon, a student of the Reformation even more than he is a Calvin scholar, to draw the reader into the time and the life of his subject in a way that none of the other biographies have been able to do. He also draws widely from Calvin’s writing, introducing lesser-known works and drawing often on his voluminous correspondence. In this way it is a more well-rounded account of Calvin than others and one that is also deeper.

I tend to measure successful biographies in one of two ways: either they teach me a lot about the subject and the context of his life or they make me feel as if I’ve met the subject himself (with the very occasional sublime biography doing both). Gordon’s Calvin falls firmly in the former camp. I did not feel like I knew Calvin himself at the end of this book, but I certainly did understand the man better, especially as I came to understand the religious and political climate he was born into and the even more complex climate he helped create.

In my opinion, this is the best biography of John Calvin to date. If you haven’t ever read a life of Calvin, this will be the place to start. And even if you’ve read each of the other biographies available, I am convinced that by reading this one you will gain a richer understanding of the man and the complex times in which he lived. I highly recommend it.