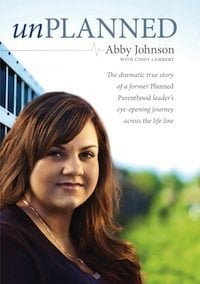 Buy from Amazon
When Abby Johnson quit her job in 2009, it became national news. Johnson was director of a Planned Parenthood clinic in Texas and did not merely quit her job, but also changed sides in the abortion battle. Formerly an employee of the organization that performs more abortions than any other, she had come to believe that abortion was morally offensive. What was it that caused her to change sides? She witnessed an abortion. On the screen of an ultrasound machine, she witnessed human life being dismembered and destroyed, and in an instant she saw what she had denied for so long–what was being aborted was a baby, not just a potential baby or a blob of tissue. She had been an eyewitness to murder and not only that, but she had been complicit in countless other murders.

Unplanned tells Johnson’s story, from being recruited by Planned Parenthood while she was a college student, to rising through the ranks and eventually becoming the director of a clinic. She also tells of her own history of abortion and how she found forgiveness for the sins of her youth.

This book has several strengths to commend it–several reasons you may want to read it.

First, it comes from an insider’s perspective, clearly describing the arguments, verbiage and subtleties used by Planned Parenthood and similiar organizations as they promote their pro-choice agenda. They weigh every word and their every action represents a careful strategy. Johnson proves what pro-life advocates have been saying all along, that although Planned Parenthood does provide some valid and valuable services for women, it is at heart an abortion provider.

Second, this book gives hope. While Johnson’s journey from pro-choice to pro-life is dramatic, there is no reason to believe that it is an anomaly. Johnson simply saw the reality that abortion destroys human life. There was nothing unique in the circumstances; she just saw clear evidence of life and reacted accordingly. The battle for life can at times seem hopeless, but Johnson proves that the Lord is at work, that science and plain facts are on our side.

Third, it shows that the ordinary efforts of ordinary people can make a difference in this battle. While the experience of witnessing abortion was the proverbial straw that broke the camel’s back, for years Johnson had witnessed the kind and patient actions of those fighting for the pro-life cause. Hundreds of short conversations and countless prayers were all part of the background to changing sides.

Fourth, Johnson speaks of her own conversion to Christianity and as she does that she shares the gospel and calls the reader to turn to Christ. That makes Unplanned a book that may be useful in evangelism.

If there is a weakness to this book, it is probably in the ecumenism Johnson describes and appears to advocate–a co-laboring between Protestants and Roman Catholics that extends beyond merely working side-by-side, but which diminishes or denies the critical distinctions between the two. This has long been one of the significant weaknesses in the pro-life movement.

That critique aside, this is an important work that will benefit any Christian. While Unplanned is a book that can be read and absorbed in an afternoon, but the story will stay in your mind far beyond that.