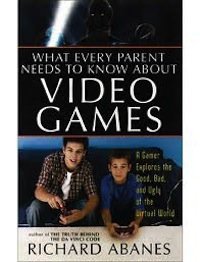 Buy from Amazon
I used to be an avid computer gamer. From the time computers became widely available, I was using them to play games. I played them for long enough to know that they don’t make them like they used to. Modern-day games have not risen above the standards set by such classics as X-Com, Railroad Tycoon, Civilization, SimCity and so on. When these games were made, computers were primitive enough that a game had to stand on the merits of its gameplay. Graphics were not exciting enough to be able to hide a bad game within pretty graphics. With recent advancements in technology, games have undergone a radical transformation. Today’s games are rapidly becoming almost photo-realistic. This raises new issues about the morality of portraying acts of violence and sexuality that were mostly unknown even a few short years ago.

Video games have often gotten a bad rap. After the awful events of Columbine High School, video games were presented as being part of the training ground for the killers. Since that time the press has often focused attention on the games played by those who commit crimes. That was proven true as recently as last week when a young man shot nineteen people in a Montreal college. There was immediate discussion of the games he played and how they may have contributed to his violent acts.

I don’t really play computer games anymore. I would only want to play the best games and, by their very definition, these games take hours, even hundreds of hours, to play and to master. I’ve known people who have invested countless hours in games. This is time I’m just not able to give. Still, I keep an eye on the industry, interested in tracing its development and evolution. I’ve seen that, while games continue to look better and better, they are also portraying increasingly-shocking acts of depravity. I know that I will need to wrestle with issues raised by video games as my children grow older and begin to become interested in them, and so it was with some interest that I read Richard Abanes’ new book What Every Parent Needs to Know About Video Games.

Abanes is an avid gamer. Throughout the book he describes his interest in various games, often pausing to share glimpses of the games he likes most. He writes as one with a great interest in the industry and as a supporter of it. “My intention is for this volume to be a small, yet significant, contribution to what promises to someday be a vast collection of video-game-related literature. Clearly, the era of video games has arrived–and all of us are already a part of it.”

If I had to boil this book down to two main points it would be these. First, computer games are neither intrinsically good or evil. Like television or theatre, video games are amoral. They can be made good or bad by those who design them, but have no intrinsic morality. Second, computer games are rated for a reason. As with film, games are rated according to their content and those who play games (or who make decisions on behalf of children), need to look for these ratings and make decisions accordingly. There are a great many games that are inappropriate for children and many that are inappropriate for everyone. Conversely, there are countless games that are a lot of fun and can provide wonderful entertainment.

Abanes explains the ratings system, explains the different genres of video games, and then concentrates on the fact that “mature means mature,” which is to say that ratings have meaning and should be followed accordingly.

The book ends like this: “I am off to spend a few hours playing Eve Online–my favorite game of all. It is time–finally time–for me to buy and fly a brand-new battle cruiser called a Ferox. I have been training for it since the start of my work on this book. Now, several months later, the piloting skills I need have been obtained, and I have enough Interstellar Kredits (space money) to make my purchase…so I can zoom off into the cosmos. Look out, space pirates–here I come!” I found it very nearly embarrassing to read such words, but at least they prove that Abanes speaks as an insider to this industry. Too many books are written by concerned Christians who know nothing of what they speak out against. Such a charge cannot be levelled against this author…and I think it’s better this way. While not a groundbreaking book, and not one that contains vast amounts of deep analysis, What Every Parent Needs to Know About Video Games will get parents thinking about the difficult issues regarding video games and reassure them that their children can engage in this hobby and do so in a way that does not dishonor God.