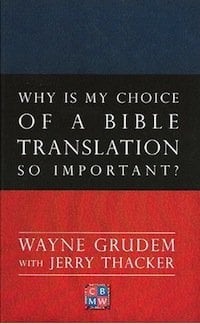 Why Is My Choice of a Bible Translation So Important is written by Wayne Grudem and Jerry Thacker and is published by the Council for Biblical Manhood & Womanhood. The title of the book may be a little bit misleading, as the book primarily addresses the shortcomings of the TNIV translation. The actual text of the book is only 15 pages and draws quite heavily upon the excellent work of Dr. Leland Ryken on this subject. After introducing the different philosophies of translation, the authors provide several reasons for ensuring that you are reading a translation that renders, as much as is humanly possible, the words of God. The points are: every word of God is important; God’s words have more depth of meaning than anyone knows; all Christians need to make sound decisions about the Bibles they buy and use; Gender-neutral Bibles change thousands of singular verses to plural and thus diminish the Bible’s emphasis on individual responsibility and relationship with God; the real controversy is whether to water down or omit details of meaning that modern culture finds offensive.

A final appendix contains two statements of concern about the TNIV that were signed by a large number of Evangelical leaders.

While I would not recommend Why Is My Choice of a Bible Translation So Important? as the first book a person should read on this topic, it is a sound, short treatment of some of the most serious problems with Today’s New International Version.