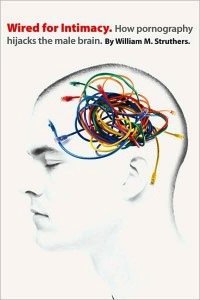 Buy from Amazon Buy from WTS Bookstore
I read recently of a researcher who wanted to study the effects of pornography on young adult males. He carefully built the structure for the study, determining how he would compare young men who had experienced pornography with a control group comprised of those who had never come into contact it. Tragically this researcher had to cancel his study. He found that he was unable to put together a control group; he could not find young men who had not discovered pornography. The experiment was impossible to conduct.

Much has been written in recent years about pornography. But new to store shelves is a book that is different from all the others, at least all of the other books targeted at a Christian audience. William Struthers’ Wired for Intimacy looks not primarily to the heart but to the brain. He shows how the male brain is hard-wired for intimacy and relationships and how pornography affects the male brain. He says “Men seem to be wired in such a way that pornography hijacks the proper functioning of their brains and has a long-lasting effect on their thoughts and lives. … When we better understand the devastating spiritual, psychological, social and biological reality of how pornography violates our unique position in God’s creation, we will be better able to minister to hose who have been wounded by it.”

What he provides is a well-rounded understanding of how pornography affects men. He looks beyond the usual–beyond the moral and ethical and legal and even spiritual. He shows that pornography is also a physical matter, “rooted in the biological intricacies of our sexual design.” Though there is value in books that look from the other angles, “calls to pray harder, move the computer to the living room and get plugged into an accountability group only go so far. They come across as hollow to many men whose brains have been altered and rewired by their experiences with pornography. They have trained their brains to respond sexually to the pornography they consume.”

Though there is value in reading this entire book, the heart of the book is the brain. In one chapter right in the middle of the book Struthers provides a primer on the brain and shows both how sexuality is hard-wired into the brain and how pornography can disrupt that God-given capacity. He shows that in many ways the male brain is built as an ideal receiver for pornography; the capacity of the brain to pursue intimacy with a wife is very easily disrupted and perverted by a desire to look at pornography. The wiring that ought to be used to pursue intimacy with one woman can easily be disrupted and used to pursue a kind of false intimacy with an endless succession of women. Men who have become consumed with pornography will have to admit with the author that “they have unknowingly created a neurological circuit that imprisons their ability to see women rightly as created in God’s image. Repeated exposure to pornography creates a one-way neurological superhighway where a man’s mental life is over-sexualized and narrowed. It is hemmed in on either side by high containment walls making escape nearly impossible.”

The author’s work in showing how the brain can be rewired (and miswired) through pornography is undoubtedly the most important contribution of the book. But I found great benefit in looking at his description of the sexual nature of the brain outside the context of pornography. Here we see how God has fearfully and wonderfully constructed human sexuality and has deeply integrated it into the inner workings of the brain. This section proves that a man’s desire to make love to his wife is not purely psychological or even mental, but something that is deeply neurological. I hardly even know how to describe it except to urge you to read this book and discover it for yourself. You will stand amazed at what God has done.

Before I close let me say that some Christians may be tempted to assume that Struthers will defend men who look at pornography claiming that “their brains made them do it.” But this is not at all the case. While the male brain does predispose men to be drawn to nudity and drawn to images of sexuality, this does not provide an excuse for indulging. To the contrary, it challenges men to be exceedingly careful about what they view and it makes them doubly responsible before God for images they’ve consumed. The implications of the neurological basis for human sexuality call men to purity before God in a whole new way.

Wired for Intimacy is a book we need. With pornography increasingly reaching epidemic proportions, this book helps us understand it at a whole new level. And it calls us to deal with human sexuality in a way that acknowledges all of its dimensions–moral, ethical, psychological, spiritual and physical. I give Wired for Intimacy my highest recommendation.