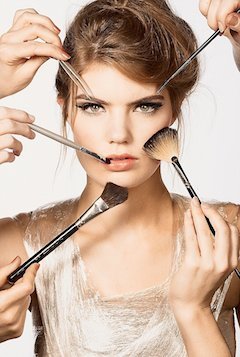 A short time ago blogger and author Rachel Held Evans wrote an article she titled “Thou Shalt Not Let Thyself Go?” She began it this way: “In my quest for biblical womanhood, I’ve found that sometimes there’s as much to learn from what the Bible doesn’t say as there is to learn from what it does say.” Her article, she suggested, reflected something the Bible doesn’t say. She looked to Mark Driscoll, Dorothy Patterson and Martha Peace and pointed out how each one of them has at one time suggested that a woman has to be careful that she does not “let herself go” after having children or after being married for some time.

“The message is as clear as it is ominous,” she concludes. “Stay beautiful or your husband might leave you. And if he does, it’s partially your fault.” She spent a month “studying everything the Bible says about women and beauty.” She “turned the Bible inside out, combed through dozens of commentaries, conducted word searches and topic studies and extensive research” and at the end of it all “found nothing in the Bible to suggest that God requires women to be beautiful.”

It is an interesting question: Does God want a woman to seek to remain attractive to her husband even while she grows older? Is there any significance to her doing this, or not doing this? Evans believes that emphasizing physical beauty, even as a woman ages (or perhaps especially as a woman ages) points to a new kind of misogyny. But after long reflection, I am not convinced. Hear me out here.

The Inner and the Outer

I agree that when the Bible speaks of beauty it largely downplays physical beauty in favor of inner beauty. According to the Bible, a beautiful woman is not one who is perfectly proportioned (by whatever society determines to be perfect) or one whose face is stunning. Rather, a beautiful woman is one who is genuinely godly, who reflects “the unfading beauty of a gentle and quiet spirit.” The beauty the Bible commends is a beauty of character more than a beauty of appearance.

But. You knew there had to be a but. I think Evans may draw something of a false distinction between the inner and the outer as if these things are entirely disconnected. I would suggest that these two things are actually inexorably connected: the outer is a reflection of the inner. And this means that the outer person matters too. What a person wears has spiritual significance because what a person wears or how a person treats her body reflects her heart. This is contra the Gnostics who believe that what is spirit is inherently superior to what is physical. The Bible allows no such tension. Though only one is immortal, both were created by God and deemed very good. Our responsibility extends to both.

When Martha Peace and Dorothy Patterson and others speak of the importance of outer beauty, I do not think they are pointing to a Barbie doll figure at 50 or a perfectly flat stomach at 60. Instead, they are acknowledging that there is a connection between what is outside and what is inside. When I read Peace and Patterson, I read less about the inevitable changes that come with years and pregnancies and illnesses and more about those things that can be controlled: dress, appearance, hygiene, care.

This is not about a woman whose body bears the battle scars that come with 3 or 4 pregnancies or about a woman who has lost a breast to cancer. This is about a woman who expresses her love and respect for her husband in her dress and in her appearance. This is not about choosing plastic surgery over surrendering to gravity’s influence on breasts, but choosing outer expressions of an inner reality. It is about brushing the hair, about choosing an attractive sweater instead of the stained Mickey Mouse t-shirt. It is about those things that display beauty, availability, respect. These things may vary a lot from time to time and culture to culture; even more so, they will vary from couple to couple. It is about drawing that connection between inner beauty and outer beauty. One controls the other.

1 Corinthians 6:19 seems applicable here. This is where Paul writes about the body being the temple of the Holy Spirit. That temple must not be abused through sexual immorality, but neither should that temple be neglected to fall into disrepair. We are to be faithful stewards of these outward bodies, even though they are wasting away.

How the Outward Speaks

At the very least, then, this means that a woman who “lets herself go” (a phrase that begs further definition) may do so for a variety of reasons. Perhaps she just doesn’t get it—she may not understand how to take care of herself. Perhaps she just doesn’t care—she does not care about her appearance and doesn’t care if anyone else cares about it. Perhaps she wants her clothes to repel—by dressing as she does she makes a statement to her husband about her regard for him and her unavailability to him. In every case, there is a connection between the heart and the body, between the adorning of the heart and the adorning of the body.

The way a woman relates to her spouse is a spiritual matter. And the way she dresses, the way she cares for herself, is a part of the way she relates to him. It makes a statement about her, about him, about them. Her words speak, her actions speak, but so too do her clothing, her appearance, her hygiene, her adornment.

It should be noted that in this way a man can let himself go just as much and it would be just as much of a sin. I know of women who have become utterly disgusted by their husbands—husbands who have given up, who do not show their wives the dignity of seeking to remain attractive to them. It is not just women whose clothes and whose appearance make a statement. It is not just women who ought to make a continued effort to be attractive and appealing and dignified.

In all of these things, a woman ought to understand (and believe) that what a man finds (or ought to find) beautiful in his wife is more about care and respect and effort and availability than it is about figure and proportion. In too many cases a woman who lets herself go is simply symbolizing that she has let her marriage go. Conversely, care for herself shows her care for her husband, respect for him, love for him.

Does a woman need to remain beautiful to her husband? Yes, she does! But this does not mean that she needs to remain beautiful in the way society understands beauty. She does not need to mimic the Hollywood starlets of years gone by who seek to look young and sexy even in their seventies. We cannot confuse beauty with sexiness. But she ought to seek to remain attractive to her husband, to allow the outer to reflect the inner. Her outer beauty, though it is diminishing by worldly standards, will be a reflection of her increasing inner beauty as she becomes increasingly conformed to the image of the Savior. Many a man will tell you that his wife is more beautiful on their 50th anniversary than on their 1st. And he is speaking the truth.

I know this is a very difficult and sensitive topic. I wrote this article about 2 weeks ago. Since then I’ve read it, changed it and passed it to women I know and trust to get their impressions or corrections. Now I’d love to get your feedback. Am I on the right track here? Why don’t you leave a comment and tell me what you think. Let’s work this one out together.