It has been some time since my last personal/family update, and it seemed like Labour Day might be the time to remedy that. I suppose most people sleep in on a holiday, but I’ve never been good at sleeping in—or sleeping at all, really. So instead I’m up early with an itch to do some writing.

Some friends who are new to Canada (they just squeaked in before the world shut down) were asking about Labour Day and how Canadians celebrate it. Relatively few people actually “celebrate” it in any meaningful way. Mostly we treat it as a day that marks the end of summer. That’s because the days are getting a little shorter and a little cooler and it’s obvious we are rapidly approaching the fall season. But it’s also because in most provinces this is the last day before schools start up again. So generally people stay pretty quiet and get themselves ready for normal life to resume now that summer is over. If we do much of anything it tends to be a walk or a backyard barbecue or something relatively simple. It’s dishing rain out there just now, so that may well put a damper on the outdoor activities.

The school year typically begins the day after Labour Day, though this year, at least in our region, it has been delayed by a week as the schools finish up their COVID prep. So my youngest, who is about to begin ninth grade, has an extra week of vacation. Then she goes back into one of those strange hybrid experiences which will see her attend classes for three hours per day Monday and Tuesday of one week and Wednesday to Friday of the next week. Having completed those morning classes, she will head home and log on to take her afternoon classes through an online learning platform. Apparently 38% of students in this area are doing the online-only option while the rest, like her, are attempting to do as much in-class as possible. It’s going to be a strange school year!

My two older kids are both set and settled down in Louisville, Kentucky, my daughter as a freshman at Boyce College and my son as a junior at both Boyce College and the Southern Baptist Theological Seminary. Both are doing great and neither one seems to want to come home anytime soon. As I mentioned a couple of weeks ago, my son quickly got engaged once getting back down to school, so as a family we are looking forward to a wedding in the spring. Just to one-up the old man, he will be a few months younger than I was when I got married!

Apart from my journey to America to drop the kids in Louisville (which, of course, involved two weeks of quarantine on each side of the border) I’ve been staying close to home. One hundred percent of my speaking and travel has been canceled, so I have been re-focusing on writing books. I have one that is nearly complete and another one I’ll begin as soon as the first is submitted to the publisher. Both are new genres for me, and I’ll tell you more about them as time goes on. As for speaking and travel, I don’t anticipate much of that resuming until we are much closer to something resembling normalcy—when I will not need to be concerned about quarantines, when I don’t need to wonder whether borders will close before I can get home, and so on. When it comes to travel my primary concern is not contracting the virus, but getting caught somewhere or being massively inconvenienced as one of the downstream effects of the virus.

On a very personal level, it has been odd adjusting to having just one child in the house. It is fun getting more time with her than I’m accustomed to, and helping her in her quest to develop new interests and learn new skills (which all summer has involved art, especially through Photoshop). But even a small house can feel rather empty when two people are far away. I miss my other kids terribly, but am thrilled at how much they are enjoying school, both on an academic level and on an interpersonal level. I don’t anticipate seeing them again until school breaks just before American Thanksgiving. I’m grateful for iMessage and FaceTime and other means of keeping in touch.

As for church, we have had enough of our members return that we now have two identical services on a Sunday morning. We are actually ideologically opposed to multiple services, but with capacity restrictions the choice is either to have multiple services or to keep more than half of our members home any given Sunday. Faced with that choice, the former seemed superior to the latter. We hope these restrictions will end soon, though we aren’t really counting on it until sometime next year.

Anyway, thanks for reading this far (if you made it this far). I’ll leave you with a picture I snapped during our little one-week foray to a cottage this summer. I woke up early (a theme in my life) and snapped a very early sunrise over Lake Calabogie. 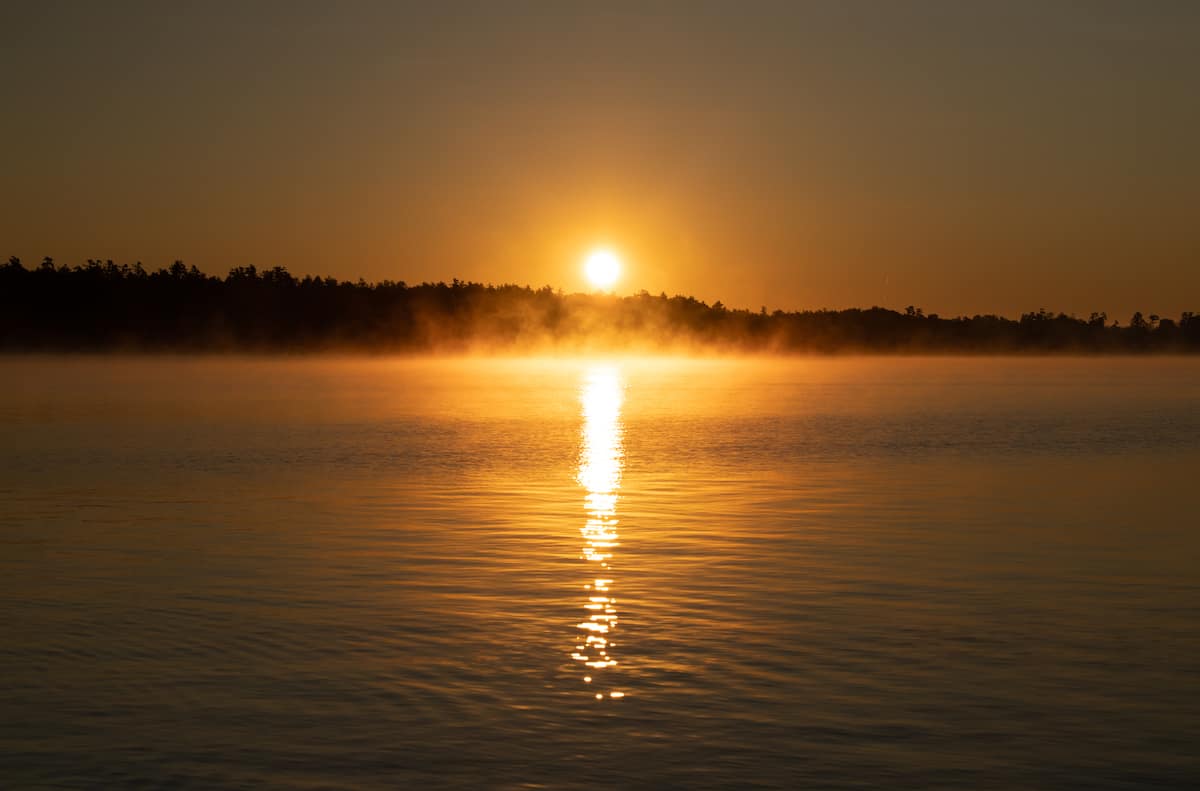