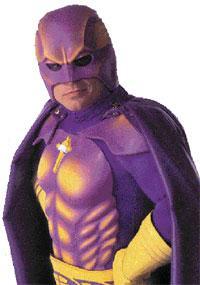 I recently read Rapture Ready, a new book by Daniel Radosh. The book is subtitled “Adventures in the Parallel Universe of Christian Pop Culture” which probably tells you most of what you need to know about it. The author, a secular liberal, immerses himself in Christian pop culture and uses this book to write about his experiences. It is at times exasperating, cringe-inducing and just plain embarrassing. Here is a brief excerpt to give you a taste of both the subject matter and the author’s perspective on it. Radosh decided to take in a live performance of the Christian kids’ superhero Bibleman, a production which I have never seen and am quite certain I never will see willingly.

The show opens with the backstory of our hero, Miles Peterson, “a man who had it all: wealth, status, success. Still, something was missing.” I don’t know about you, but when I feel that something is missing I usually mope around the house or browse YouTube for videos of cats falling off stuff. Miles, however, goes tearing out into a rainstorm and collapses in a sobbing heap. “Then, in his darkest hour,” Miles finds something half buried in the mud: a Bible. Not Just any Bible—a radioactive Bible. No, actually, it is just any Bible. But apparently that’s enough to turn him into Bibleman.

In this episode, Bibleman and his sidekicks, Cypher (the black guy) and Biblegirl (the girl), go up against a villain called Primordius Drool, a mincing green-skinned fop with a lisp and a fondness for show tunes. Subtlety is not Bibleman’s strong suit. The same actor also plays a talk show host named Sammy Davey, who is a classic stereotype of a New York Jew, complete with nerdy glasses and a giant Jew-fro. Slouching and cringing, Sammy Davey needles and browbeats poor Bibleman in an accept so thick that he pronounces Bibleman with the same inflection as names like Silverman or Lieberman.

The heart of the show is the fight sequences, typically involving a darkened warehouse (all the better to obscure the lackluster choreography) and Bibleman swatting away CGI fireballs with his lightsaber while announcing, “Isaiah 54:17 says ‘no weapon forged against me will prosper!’” Every now and then, Bibleman shares a lesson with his sidekicks, as when he laments that people “allow their minds to cover up what God has placed on their hearts”—a near perfect pitch for the common evangelical notion that feelings are to be trusted above rational discernment, a belief that many nonevangelicals would be distressed to hear is being passed on to eight year-olds.