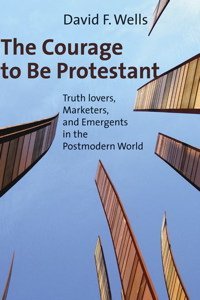 Buy from Amazon Buy from WTS Bookstore
My interest in reading good books came a little bit too late to read David Wells’ four part series of books as they were released (No Place for Truth, God in the Wasteland, Losing Our Virtue and Above All Earthly Pow’rs). I now have the four volumes sitting on my bookshelf and have often thumbed through them wishing I could muster up the motivation to dive into the series. The problem is that I am intimidated as I look at them and consider that each of them weighs in at several hundred pages. I know that twelve hundred or more pages of dense content would prove quite the challenge to me and to my too-short attention span.

This is the very reason Wells chose to write The Courage To Be Protestant. This is not a fifth entry in the series as much as it is, or as much as it began at least, as a summary of them. “Once this work got under way,” Wells writes, “I found myself not so much compressing as recasting all that I had done and then updating it. The result is that this book is less a summary and more an attempt at getting at the essence of the project that has engaged me over the last fifteen years. And, hopefully, it will be more accessible than the previous books, not to mention less taxing on readers!”

Wells gets straight to the point. “It takes no courage to sign up as a Protestant…To live by the truths of historic Protestantism, however, is an entirely different matter. That takes courage in today’s context.” The truths that Protestants have lived and died by have somehow become no more welcome within a Protestant context than in the outside culture. Those who would seek to live by the distinctives of the theology of the Bible must have courage to stand not only against the world but against much of the church.

In an opening chapter Wells describes the lay of the Evangelical land and here he refers to three distinct constituencies into which Protestantism seems to be dividing in our day. These constituencies, though, are not drawn around issues of theology as they may have been in days past. “When all is said and done today, many evangelicals are indifferent to doctrine.” What rearranges the evangelical territory in our day is the culture around us and our engagement with it. This is not a serious engagement with culture, but instead a pragmatic catering to it. “This quest for success, which passes under the language of ‘relevance,’ is what is partitioning the evangelical world into its three segments.” The partitions Wells refers to are classic evangelicalism, marketers and emergents.

Having described how marketers and emergents arose out of classical evangelicalism, he provides a chapter called “Christianity for Sale” in which he shows how in recent decades churches became convinced that they must change their way of doing business or face inevitable extinction. This “church as business” model transformed the way churches perceived themselves and led to the raising of methodology over theology. “What began as a simple recognition by church marketers that parking should be convenient, signs evident, and bathrooms clean has somehow begun a migration.” The migration eventually led to the transformation of not only the traditional church but also the traditional theology it lives by. The church began to look at the unchurched men and women around them as customers and those customers soon became their theology. The Bible fell out of favor as pragmatism took over.

The bulk of the book looks to the five predominant themes arising from Wells’ previous four books. The themes are truth, God, self, Christ and church. Each one is treated in a substantial chapter. Time would fail me to describe each of these chapters. Suffice it to say that this book is much like watching Sportscenter or another sports highlights show. It is a highlight reel of the previous books. Where during the course of a typical ballgame you can expect there will be stretches where you will witness little of great importance, during the highlight shows you need to pay attention as you’ll see only the most important moments. This book is similar. Every page is important and every chapter is packed with fascinating content. Rare is the page in my copy of the book that is not stained with substantial amounts of highlighter.

The Courage To Be Protestant marks the end of Wells’ magnum opus—the work to which he has dedicated himself for almost two decades. It is an utterly brilliant book and one that I feel is a recommended read, and maybe even a must read, for any Protestant. Wells kept me glued to his text for page after page as he challenged me, as one who seeks to be a classical evangelical and who seeks to hold faithfully to the theology of Scripture, to display the courage it takes to be Protestant in the church today.