(Note: I know that I owe you an article on how to read a book. It’s coming; it may be tomorrow, it may be next week. But it’s coming.)

Several years ago I introduced a program called Reading Classics Together. The impetus for this project was the simple realization that, though many Christians want to read through the classics of the faith, few of us have the motivation to actually make it happen. I know this was long the case for me. This program allows us to read such classic works together, providing both a level of accountability and the added interest of comparing notes as we read in community. Those who have participated in each of the programs will now have read Holiness by J.C. Ryle, Overcoming Sin and Temptation by John Owen, The Seven Sayings of the Savior on the Cross by A.W. Pink, The Religious Affections by Jonathan Edwards, Mere Christianity by C.S. Lewis, Real Christianity by William Wilberforce, The Rare Jewel of Christian Contentment by Jeremiah Burroughs and Redemption Accomplished and Applied by John Murray. That is quite a solid collection of classics! I have benefited immensely from reading these books and know that others have, too. The format is simple: every week we read a chapter or a section of a classic of the Christian faith and then on Thursday we check in at my blog to discuss it. It’s that easy: one chapter per week. 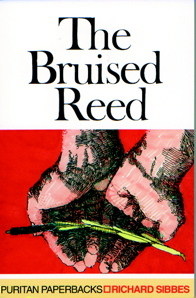 It has been a few weeks now since we finished reading the last classic together. We finished reading Redemption Accomplished and Applied, an excellent book and, by any measure, a true classic. Though I have long been familiar with classic Reformed theology, I learned a great deal from Murray. And now it’s time to move on.

Today I want to announce the next classic we’ll be reading together. We’ll be heading back to the Puritans and reading The Bruised Reed by Richard Sibbes. First published in 1630, the book has long been a source of spiritual comfort for Christians. Sibbes exposits Isaiah 42:3 and “unfolds the tender ministry of Jesus Christ, who is ‘a physician good at all diseases, especially at the binding up of the broken heart.'” Charles Spurgeon said of Sibbes that he “never wastes the student’s time … he scatters pearls and diamonds with both hands.”

At Puritan Sermons you can read an article from Banner of Truth magazine that provides a useful overview of the book. The author of that article says, “Though well written and reasoned, The Bruised Reed is far from a scholarly treatise. It was originally published as ‘Some Sermons contracted out of the 12. of Matth. 20.’ It was not written in the heat of academic debate, but in the heat of pastoral concern, as the title page continues: ‘At the desire, and for the good of weaker Christians.’ But Sibbes writes armed with more than just a pastor’s concern. He writes with a physician’s skill, for he knows the true cause of his readers’ woes and symptoms, and wastes no time in directing them to the cure.”

He concludes his article with these words:

Richard Sibbes writes and preaches as a man constrained and compelled by the love of Christ. He cannot know enough about Christ. For more than anything else, Christ defines his existence. And he has found Christ to be the source of everything good and needful. The Bruised Reed represents a distillation of this Christocentric world view, and in it Sibbes writes persuasively, with both tenderness and compelling urgency, betraying by his words an intimacy with the ways of God. He counsels as one who knows what it means to be broken and bruised and poor in spirit before God. His words carry with them the wisdom of one who has spent many hours at the feet of his master. He preaches as one whose sins have been forgiven, whose heart has been filled with Good News. And he speaks with the peace of one who knows what the final outcome of the battle will be. Thus, in The Bruised Reed, Sibbes reveals the fountain of his life, the very core of motivation in his heart. But not of Sibbes only. He simply expresses most clearly the experience of many in his day. A recovery of this experimental and marrowy Calvinistic teaching is one of the church’s greatest needs in our day.

It sounds like there will be a lot to benefit each of us in such a book.

I will be reading the Banner of Truth edition that is part of their Puritan Paperbacks series. It includes very minor updates to language and punctuation but is largely the original text. I’d encourage you to purchase the book as well. Though it is available for free online, I think it’s best to be able to write in your book, mark it up, and make it your own.

You can buy it at: Westminster Books (just $4.90). Unfortunately Amazon has it available only through sellers, not through their store.

If you are going to read with me, leave a comment and let me know!