A couple of days ago I was sorting through the bag of Halloween candy, teaching my children a little lesson about taxation. As I did so, it dawned on me how much of the candy they received is distinctly Canadian; there is a surprising amount that simply is not available south of the border. And I feel bad for my American friends. Seriously, what is Halloween without Smarties (Canadian Smarties, mind you, not those American candies you call Smarties), without Coffee Crisp, without Aero bars or Mars bars? It just isn’t Halloween without at least some of this stuff.

So I got to thinking, I need to help some of my American friends see how good this stuff is. Here’s how I’ll do that. I will send a few of you some candy bars and other Canadian snacks. All I ask is that you eat them and report back on your experience of these Canadian delicacies. Got it? It’s that easy.

Simply leave a comment below. I’ll randomly choose a few winners. Needless to say, this one is open only to Americans.

Let me tell you what you’ll be getting. Note that what you may call candy bars in the US of A, we call chocolate bars. I’ll probably use both terms, infuriating both Americans and Canadians.

Smarties – Yes, you have something called Smarties in the United States. In Canada we call those things Rockets–little tubes of colored, chemically-flavored sugar. Here in Canada Smarties are kind of like M&M’s, except they melt in your hand and in your mouth. And they have significantly less of a dirt taste. They are little chocolates covered in a thin coating of candy. They come in a variety of flavors and, as every Canadian knows, you have to eat the red ones last.

This graphic pretty much sums up the difference: 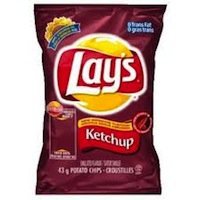 Ketchup Chips – Yes, you have a lot of flavors of chips in the United States and we have most of those ones (and all of the good ones). But we also have ketchup chips. While I can’t deny that they’re not my favorite (I’m more of a sour cream and onion guy) they are a Canadian institution and every respectable manufacturer makes them. What do they taste like? Well, they taste like Salt and Vinegar chips but with a bit of ketchup added in. The ketchup flavoring makes the chips take on a reddish tinge that will soon be all over your fingers and, when you wipe them on your pants, there as well. 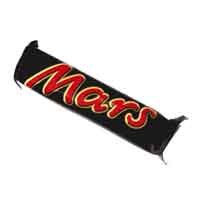 Mars – The Mars bar is kind of like an American Milky Way (not to be confused with a European Milky Way which is something completely different) but I believe it is a bit sweeter (I’ve never actually done a head-to-head taste test). It is also not to be confused with the American Mars bar which is very different. Mars is simply nougat and caramel covered in milk chocolate, but somehow it’s amazingly delicious. I hear rumors that you can now find Mars at some American stores (including Wal-Marts) but since it’s a bit outside the mainstream, I thought I’d include it here. Many fish and chips stores around here sell it deep-fried, something that you’ll find utterly delicious immediately before it clogs your arteries and stops your heart.

Coffee Crisp – Why haven’t more people explored coffee-flavored chocolate bars? Coffee Crisp combines coffee cream, cookie wafers and cover it all in milk chocolate. Then they smack it all in a yellow wrapper and call it a nice.light.snack. Ask a Canadian how he likes his coffee and he might just say, “I like my coffee crisp” (assuming that he is old enough to remember that advertising campaign). The way I figure it, if you can put coffee in a chocolate bar and make kids still find it delicious, you must be doing something right. This is probably one of the top two or three snacks Canadians crave when they move away.

Caramilk – I was rather surprised to learn that Caramilk is not sold in the United States (I hear that the Caramello is quite similar, though produced by a different company with different ingredients). It’s a delicious candy bar that combines milk chocolate with gooey caramel–the kind of caramel that remains soft and runny even inside the little chocolate bubbles that contain it. There are various adaptations of this one (dark chocolate, cappuccino, etc) but the classic remains the best. This is one of my favorites, even though it makes my teeth hurt.

Aero – The Aero bar is all about the chocolate. It combines chocolate with, you guessed it, air bubbles. I know, it doesn’t sound like a whole lot, but it’s really good. I guess it depends on the flavor of the chocolate and the interesting texture and sensation of eating chocolate that’s full of air bubbles. It probably sounds like we’re a bunch of suckers paying for air, but don’t knock it until you’ve tried it. Once again, the manufacturer has tried various versions of this one, adding orange or mint or other flavors, but nothing beats the classic.

Mackintosh’s Toffee – While this one is available in the UK as well, it’s become something of a quiet institution here in Canada where it’s sometimes known as MACK. Typically it comes in big slabs about the size of an Aero or Caramilk (not that this helps you much). Recently they’ve adapted a bit by selling it in individually-wrapped portions. Meh. I had fond memories as a kid of chewing on a massive piece of this toffee and yanking out all my fillings. It’s just toffee, but they manage to make it really good. You can always tell it by the distinctive tartan packaging.

Hickory Sticks – Hickory Sticks are like little french fries, except that they’re hickory smoked, giving them an interesting flavor. They aren’t my favorite, especially in large quantities. Yet they really do have a nice flavor (at least when eaten in moderation–smoked anything tends to get to me after a while). This is another Canada-only snack that is manufactured by Hostess. They don’t quite have the profile or the charm of ketchup chips, but they still sell well and just about every Canadian knows exactly what they are.

Nestle Turtles – Turtles contain pecans and lots of Caramel covered in milk chocolate. There was a time that they were available across the US, but they’ve since become a Canada-only treat. They are available in a candy-bar kind of snack size (which contains three turtles) they are more commonly sold in boxes, especially around Christmas time. They’re gooey, crunchy, chocolatey and oddly addictive.

So there you have it–ten great Canadian snacks. If you want to try out some of them, just leave a comment…