I want to tell you about LeechBlock. It’s a little tool I found about a couple of years ago and I can say without a trace of exaggeration that it changed my life. I wrote about it once before–back after I discovered it–but want to come back to it since it’s proven its value again and again since then.

There was a time that I was unable to keep myself from wasting vast amounts of time on the internet. Often it was subconscious; I would suddenly become aware that I had stopped working and started surfing. I had inadvertently left behind what I had been doing and was checking in at Facebook or Twitter or any one of these other time-sucking distractions. Thanks to LeechBlock, those days are over.

LeechBlock is an add-on for Firefox. It is the brainchild of James Anderson, an assistant professor at Reformed Theological Seminary in Charlotte.

The premise is simple. It is meant to be an external form of self-control for those of us who do not have sufficient self-control in and of ourselves. Here is what James says about it: “LeechBlock is a simple productivity tool: an extension for the Firefox web browser designed to block those time-wasting sites that can suck the life out of your working day. (You know: the ones that rhyme with ‘Blue Cube’, ‘Pie Face’, ‘Space Hook’, ‘Hash Pot’, ‘Sticky Media’, and the like.) All you need to do is specify which sites to block and when to block them.”

It is not meant to replace tools that offer parental controls and will not keep you from stumbling across nasty sites on the Net. That is not its purpose. What it will do, though, is allow you to compile a list of the sites that suck away the minutes and hours of your day and choose the times during which you will be blocked from those sites. So in my case I listed Facebook, Twitter, Google Reader, Drudge Report and others like them and set the program to block these from 9 to noon and 1 to 5. That gives me a window to check in while I eat my lunch but otherwise I have no access to these sites during the working day. And that has proven a huge blessing.

I learned two things. First, I learned that I spent far more time on these sites than I would have thought. Or, perhaps more properly, I learned that I visited them many more times every day than I would have imagined. The amount of times LeechBlock had to intervene and scold me was both shocking and humiliating. Second, I learned that these sites really were sucking my time away from me. As soon as I installed LeechBlock it was like I added a couple of hours to my day. Not only did my productivity increase but my spiritual condition also improved. I had known that I was wasting vast amounts of time but had not had the self-control to stop myself; I found it very depressing and carried it like a great burden. It was a great relief to me to find that self-control, even if it took a Firefox add-on to do so.

One of the great features of LeechBlock is it allows you to create a custom message that appears when you attempt to visit one of the sites you’ve blocked. In my case I made one that reminded me of the value of time. You can see it here (click on it to download it for your own purposes): 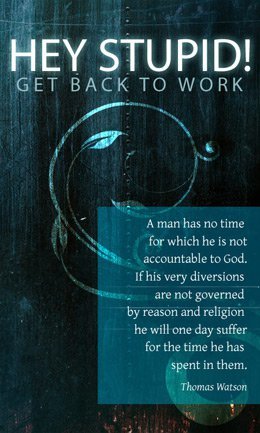 Now I know that not everyone needs a tool like this one. But I can testify that there are others who do and I am among them. I’ve recommended LeechBlock to friends and they’ve told me how much they’ve benefited from it as well. So I’m not alone! If you are in need of an external source of self-control, consider it. It may just change your life too. You can learn more about it and download it here.