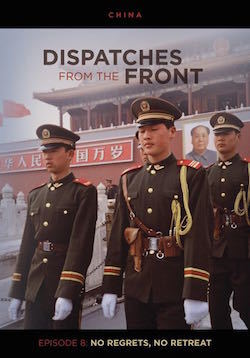 I don’t use the television much anymore. There was a time when I watched a lot of movies and a lot of programs, but these days there isn’t a lot that catches my attention enough to actually dedicate the time to it. There isn’t much that promises more value than I would get from the same time spent with a good book. But I always make an exception for Dispatches from the Front.

Dispatches from the Front is a growing series of videos that follow Tim Keesee as he travels around the world, looking for the hidden and persecuted church. Previous dispatches have taken him to Eastern Europe, North Africa, India, and just about every other region where the church is in danger. The most recent episode, No Regrets, No Retreat takes him all the way to China.

But fittingly, Keesee begins in England. It was, after all, England that first sent Christian missionaries to China. The great Hudson Taylor caught a vision for China and founded China Inland Mission which eventually sent a host of men and women to the far side of the world. As Keesee says at the outset, China has always been to missionaries what Everest is to mountain climbers. The sheer size of the country has always been both daunting and challenging. For most of her history, and certainly her modern history, China has been hostile to the faith. And yet the scope and danger of the challenge has only served as increased motivation for generation after generation of missionaries.

Those missionaries did what God called them to, and the gospel did its work. Today there may be as many as 100 million Christians in China, and China has a growing and thriving church movement all her own. While there are still dangers associated with being a Christian, and especially so outside of the government-sanctioned churches, the government is having to face the reality that their attempts to stamp out Christianity have utterly failed and, if anything, have only catalyzed greater growth. With the church in rapid decline in the west, it is not hard to imagine a future in which China returns the favor, and begins sending missionaries to England and North America.

In this episode, Keesee spends most of his time with one Chinese Christian, one woman, who for decades has been active in teaching and evangelism and even running Christian bookstores. He goes with her to major population centers and to smaller locations, always meeting other Christians, always hearing their stories, and always being encouraged by their deep-rooted faith.

I have enjoyed each one of the episodes of Dispatches from the Front and equally enjoyed the book by the same title. (You can read my review here.) I even took some time out of my vacation last summer to sit and enjoy a coffee with Tim. I regard him as a trusted guide to each of the locations he visits, and have benefited immensely from his interactions with Christians in those places I will never be able to visit. I look forward to each new episode and gladly commend to you both this episode and the entire series. Watch them and you will be both challenged and encouraged.

No Regrets, No Retreat: China is available only in DVD format; for the next few days you can get it for just $6 at Westminster Books (which is a 60% discount). You can also get the complete collection of 8 episodes for just $42.