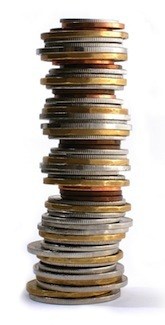 In eleven years of parenting my wife and I have often discussed our responsibility to train our children in their understanding of money. We have often spoken of giving them an allowance as just one component of this training, but we’ve always lacked the “big picture” of how we should do this, and why.

Recently I read Family Money Matters by John Temple and in that book I found just what I needed. The final chapter is dedicated to this topic of training your children in their use of money. What I came to see is the importance of training the kids not just to use their money well–to be frugal and wise and generous–but to honor God with their money. And in order to train them in this way I will need to ensure that they a) have money and b) have a realistic context in which to use it well or use it badly.

With that big picture finally in place, I was left with 2 questions: How will giving my children an allowance train them to use their money in a way that honors God? And how much should I give them? Let me show how Temple helped me answer these questions.

How much pocket money or allowance should be given? This is a tough question and one that needs to take all kinds of factors into account such as where the family lives and how much the family earns. It should probably not take into account what other children receive as this teaches from an early age that they should seek to keep up with the neighbors.

Temple provides a spreadsheet that I’ve found very useful. It “sets out a suggested range of allowances on a unit basis. Families can then translate these units into their country’s currency as appropriate.” The spreadsheet will not tell you how much to give to your children, but it will help you as you attempt to increase the amount you give them and as you attempt to teach that with greater age comes greater responsibility. If you need a little nudge, though, I can tell you that we’ve begun with 4 as a logical multiplier (based on a monthly, not weekly, allowance). Having said that, my two oldest children each have a paper route and earn money on their own, so their needs may be less than some.

You can download the spreadsheet right here (scroll down and look for “Children’s and Teenagers’ Allowances”).

Here is what you need to know to use the table:

First, the table assumes that an allowance should increase by 15% each year since this is generally thought to be the minimum noticeable amount. The table also accounts for inflation at 5% per annum. Here is how it all works:

Assume you have two children who enter the allowance scheme in the base year. One is four years old and the other is eleven. The four-year-old will start off with an allowance of 1.00 unit per month (or week), and the eleven-year-old will start off with an allowance of 2.66 units. After one year the four-year-old will get 15 percent more, taking him or her to 1.15 units, but he or she will also get the inflation increase, which will give him or her 1.21 units, as can be seen by following the shaded diagonal line downwards to the right.

When this four-year-old reaches twelve, he or she will get 4.52 units. The eleven-year old will likewise go from 2.66 to 3.21 units. Now, assume that in this, the second year, another four-year-old sibling joins the scheme. He or she will start at 1.05 and will then follow the diagonal line below the lightly shaded line–that is, 1.27, 1.53 and so on. This table can be used for all children between the ages of four and twelve.

Are you still with me?

This offers guidance on paying an allowance to children between the ages of 4 and 12. At this age the children will have few financial responsibilities. You will want to teach them to give a portion to the Lord and you will want to teach them to save at least some and to use their own money to buy birthday and Christmas gifts. And on some level you will want to make their allowance contingent on work they perform around the house (such as mowing the lawn or keeping their rooms clean). Aileen and I have chosen to pay them half of their monthly allotment twice per month. But this is really just a means of giving them early and basic training. The real training comes in the teenage years, and this is where the scheme really comes into its own.

Why Do They Need an Allowance?

At the age of about thirteen, children will want to take on additional responsibilities for their lives and should be encouraged to do so. My suggestion is that parents should now pay only for normal living expenses plus all education expenses (including uniforms, if applicable) and perhaps for one winter and one summer sport (including any clothing), plus one cultural activity, such as music lessons. Parents should determine and record what these activities are. All the following should then become the responsibility of the teenagers and paid out of their allowances: additional sport; additional cultural activities; nonessential toiletries (e.g. make-up for girls); clothing other than any sports gear included in the parents’ portion; all entertainment; mobile phone; candy and all “treat food”; pocket money. The teenagers should be given allowances just sufficient to cover a reasonable combination of these expenses if they are careful and responsible. They must learn to prioritize and accept that none of us has either the money or the time to do everything all at the same time. Clearly, many gray areas will need to be decided upon. The key is to write everything down and then resist a monthly renegotiation! My wife and I never departed from this scheme, and, because their allowances were low compared with those of their friends, our children all found ways to supplement their incomes.

Here is how Temple suggests allowances be structured for teenagers and then for college students. Obviously the amounts may need to be finessed depending on the particulars of a situation (such as whether a college student is living at home or on campus). Again, be sure to keep the amounts “frugal” but realistic.

If the base multiplier is 4, for example, you will be paying your thirteen-year-old forty dollars per month. With that money (plus money he earns on his own) he will need to pay for his own clothing, mobile phone, entertainment and so on.

Overall, I’ve found this just the kind of scheme I can work with. It is obviously not the only way to train your children to wisely steward their money, but certainly it’s one possible way. What I love most is that it goes beyond just giving money to the children, but also gives them responsibility. I may be giving them more money than I otherwise would, but they will also then be taking care of their own expenses from that money. While I may be giving my children a large sum by the time they are teenagers, that money will be used for expenses I would be paying anyway. The difference is that my children will be taking responsibility for it themselves.

If this scheme is at all interesting to you, you would do well to read Family Money Matters. You can buy it at Amazon or directly from DayOne.