This sponsored post was written by John Majors a writer and speaker for FamilyLife®. John is a host on Passport2Identity™, a new resource that enables parents of teens to have a life-changing getaway with their son or daughter. Click here for a special offer.

Consider the confusing path teenagers must navigate today on just one subject—their sexual identity.  Understanding sexuality is difficult enough for any adolescent, but our culture is crammed with confusing questions and messages about gender roles, peer expectations, sexting, pornography, sexual morality, homosexuality and transgenderism.  Sexual images and messages bombard us continually.

Without a doubt the teen years are some of the most confusing when it comes to understanding who you are—your identity.  But knowing what shapes your identity can make all the difference between flourishing and floundering.

Here are four suggestions for helping your teens discover their identity:

1. Help them respect authority. Driving a car requires a respect for authority: Stop at traffic signals, stay between the lines, obey speed limits.  And respect for authority is a thousand times more important for building an identity.  For example, teens must decide who their authority is for life’s decisions.  What governs their beliefs and behaviors? Help your teens learn that their ultimate identity must be rooted in a timeless authority—it must be rooted in Christ.

Colossians 3:2-3 says, “Set your mind on things that are above, not on things that are on earth.” – You must look to a timeless authority to gain the proper perspective on who you are – look above – not to the things on earth, which pass away.

2. Help them build a “band of brothers.”  Teens often listen to their peers more than their parents. Thus their friends significantly shape their identity—for better or worse. Speaker and author Charles “Tremendous” Jones said, “You’ll be the same person tomorrow as you are today except for the books you read and the people you meet.”

One dad I know understood this, so he gathered other fathers and sons he respected and led them through a study of biblical manhood. These young men began to catch a vision for how they could make one another stronger through accountability and encouragement. They kept meeting and eventually created a group that multiplied other groups. But it all started with one dad taking the initiative to connect his son with other young men. What dads and sons could you gather to help your son (or daughter) build a band of friends?

3. Help them do something.  Most teens struggle to answer the question, “What am I good at?” Greg Harris, father of author Joshua Harris felt one of his roles as a parent was to help foster the interests he observed in his children. When he saw them taking interest in something productive, he was quick to open his checkbook to help them pursue the new passion. He said, “I wasn’t so much concerned with what they were doing, but that they were doing something.” Help your kids find ways to try a variety of things to see what they’re good at. You don’t have to spend tons of money to get a child going. But get them busy doing something. God will use that to help them identify the gifts and talents He’s given them.

4. Get away and talk about identity. The middle teen years are full of confusion, and it’s probably the hardest season to talk in a way you both really hear each other. To break the cycle, take your teenager away from your normal environment and spend a weekend talking about these issues with the new retreat kit, Passport2Identity, from FamilyLife.

Passport2Identity is two separate resources, one for young men and one for young women, that tackle the tough issues teens face at around the ages of 14-16. The audio teaching comes from over twenty experts including Dennis and Barbara Rainey, Paul David Tripp, Voddie Baucham, Rosaria Butterfield, and more.  With this Getaway Kit, a mom or dad can take their son or daughter away for the weekend to discuss what it means to root your identity in Christ as a young man or a young woman.

If you’re interested in Passport2Identity, take advantage of our special offer of 25% off by using the promo code CHALLIES at checkout.

“As a father of five sons, this is the resource I’ve been looking for, and praying for. One of the biggest worries parents have is how to get their children ready for independence and adulthood, how to find their way in the world. This burden is especially weighty for Christians, as we must teach our sons and daughters to prepare not only for this life but for the next. This resource is a God-send. You will feel as though you are being mentored personally by wise leaders who have walked this path before you. The end result will be more confident and Christlike parenting, and a word of hope and direction for young men and women at the most formative time of their lives. I highly recommend Passport2Identity, and I wish it had been around when I was in my teen years.”
Russell Moore, President
Ethics & Religious Liberty Commission
Southern Baptist Convention

“The materials produced by FamilyLife, such as this new series Passport2Identity, always provide biblically faithful, practical, wise, guidance for parents seeking to train their children to follow the Lord in an increasingly hostile modern culture.”
Wayne Grudem, Ph.D.
Phoenix Seminary

“Passport2Identity will deepen the connection between moms and daughters and help launch the next generation of Christ-centered, purposeful women.”
Nancy DeMoss Wolgemuth
Revive Our Hearts 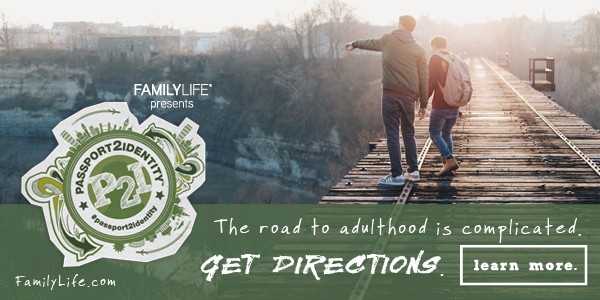