This sponsored post was written by Matt Carter on behalf of Steal Away Home.

I first discovered Thomas Johnson researching for a book I was writing with my friend Aaron Ivey called Steal Away Home: Charles Spurgeon and Thomas Johnson, Unlikely Friends on the Passage to Freedom. Going into the research, I was convinced that Spurgeon would be the hero of our story. That was until I discovered Thomas through his autobiography. Through his autobiography, we encountered the man himself. In fact, many of the quotations in our new book came directly from Johnson himself through the autobiography.

It’s safe to say that many men who live remarkable lives go remarkably unnoticed by history. Thomas Johnson serves as a notable example of this trend. The question is, who is Thomas Johnson? And, even if he was a remarkable man, why should we care?

Born in Slavery, Longing for Freedom 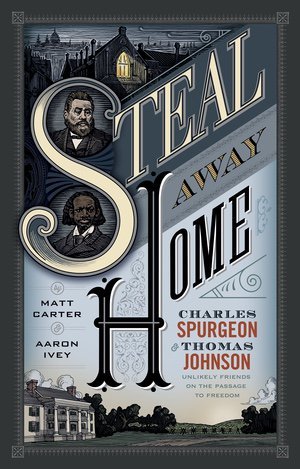 Thomas Johnson was an African-American, born into slavery on a Northern Virginia plantation in the mid-1800s. When he was only ten years old, his mother was sold to another plantation. The one person in his life who brought him a sense of stability and peace was suddenly gone. The separation produced in his soul a bitter hatred for his captors, and an insatiable desire for freedom.

Thomas would spend much of his time in the tobacco fields, toiling away from sun-up to sun-down, experiencing a level of back-breaking labor that is hard to fathom. But on some days, the master of the plantation would allow Thomas to work in the “Big House,” cooking food or serving guests for various parties. On the dining room wall hung a map of the eastern part of the United States. Although he could barely read or write, Thomas memorized the names of the towns from Richmond, Virginia to Washington, DC, with the hopes that he could one day muster the courage to escape from the plantation that kept him in chains.

One of our favorite scenes from the book was one that could have happened, but that we added from our imaginations. The scene is set at a book burning. Southern plantation owners were burning the books of a London pastor named Charles Spurgeon, because he had the audacity to oppose the transcontinental African slave trade. Through Thomas’ eyes, we see not a grim scene of outrage, but the light of hope in the darkness. Spurgeon was no enemy; he was a friend, worlds apart.

Years later, still on the plantation, Thomas discovered freedom, but it was a freedom he had never expected. Through a friend and fellow slave, Thomas heard the message of the gospel of Christ and trusted in Jesus as his Lord and Savior. In his autobiography, Thomas wrote, “As if a great burden was suddenly lifted, and the freedom that I had longed for was given to me, not in freedom from physical chains, but in the true freedom of my soul.”

After his salvation, Thomas Johnson was given physical freedom at the fall of Richmond, Virginia and the Emancipation Proclamation. With his newfound freedom, Thomas could think of no greater way to spend the rest of his life than as a missionary to his native land of Africa. Thomas wanted, more than anything else, for Africans to experience the freedom he had discovered in Christ.

Becoming a Student Under the ‘Prince of Preachers’

Thomas’ greatest obstacle was his lack of education. His twenty-eight years as a slave had left him woefully uneducated. Through an English friend, Thomas heard of a preacher from London named Charles Spurgeon. Spurgeon, one of the greatest and most famous preachers then as well as now, had garnered himself quite a reputation in the southern states as a vocal opponent to slavery—what he called “the foulest blot that had ever stained a nation.”

Thomas’ friend petitioned Spurgeon to call the young, former slave to attend the “Pastor’s College” to receive an education and training for the mission field. When Spurgeon heard of young Thomas Johnson’s request, Spurgeon simply replied, “Let the dear man come.” Thomas Johnson and his wife, Henrietta, set sail for England and spent the next three years preparing to become missionaries to Africa. Not only did Thomas Johnson become the first African-American student at Spurgeon’s College, but he became one of the first missionaries to Africa from the United States.

Thomas Johnson was an extraordinary man. His story is one that needs to be heard by Christians today to remind us faithfulness under the hand of persecution, the saving power of the gospel, and the way that the Spirit can use crooked sticks to draw straight lines for his glory.

Thomas Johnson’s life, until now, has been largely overlooked by history, but his legacy of faithfulness to God is still very much alive.