Johann Heinrich Alsted wrote: “The article of justification is said to be the article by which the church stands or falls.”  The Reformers sought to recover this vital doctrine, which is at the very heart of the gospel. Brave men such as John Wycliffe, Martin Luther, John Calvin, Heinrich Bullinger, Theodore Beza, John Knox, and many others gave their lives—often literally—to defend this quintessential doctrine of grace.

The Reformers wrote a great body of literature to guide the church through the time’s treacherous waters. But in the generation after the Reformation, there remained little in the way of a comprehensive, rigorously systematized synthesis of Reformed theology to precisely communicate and preserve the Reformers’ legacy. 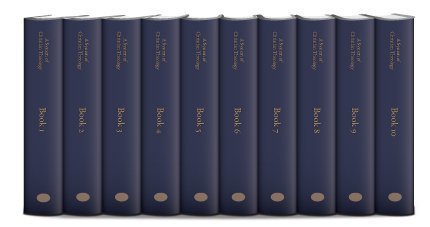 In the midst of this battle for truth, the gifted scholar Amandus Polanus provided the Reformed churches with one of the earliest and most extensive Reformed systematic theologies: the Syntagma Theologiae Christianae. This monumental achievement synthesizes the body of Reformed theology into a coherent and rigorous system. Not only does it preserve and defend the Reformers’ original theology; it also presents it in a precise, nuanced way.

The Syntagma covers all the topics addressed in standard theologies, but with a skill and precision that has few equals. Richard Muller describes Polanus’ treatment of the attributes of God as “Perhaps the clearest and fullest summary of the entire paradigm.” Polanus is also eminently practical and addresses the church’s needs with an extensive treatment of Christian ethics. “[Polanus] portrays the state of emerging Reformed orthodoxy in the crucial years between Theodore Beza and the Synod of Dort. . . . Polanus is a bridge between the pristine Reformed teaching and orthodoxy, scholastic in constructing theology with academic precision and logical rigor but, with a strong doctrine of God, oriented to christological, soteriological, and practical concerns” (Evangelical Dictionary of Theology).

Polanus’ importance in preserving the Reformed tradition and shaping its development is undeniable. Robert Letham writes, “Amandus Polanus is one of the most significant dogmaticians of early Reformed orthodoxy . . . . As a consolidator, a preserver of the tradition, he brings the whole field of theology together into a systematic unity. . . . His intent is to meet the needs of the church of his day, a generation or more removed from Calvin and facing new challenges which require fresh and perhaps clearer and more rationally developed solutions. . . .”

As a student, he was trained at Basel by Calvin’s successor, Theodore Beza. He later became an influential professor at Basel, where he instructed important figures such as Johannes Wollebius and others who would become the next generation of Reformed theologians and ministers. Polanus’ work served as one of the primary sources that would go on to influence the enduring Reformed confessions, such as the Canons of Dort and the Westminster Standards.

For centuries, this seminal work was required reading at Reformed seminaries. Now, Lexham Press wants to produce the first-ever English translation of Polanus’ Syntagma, previously available only in rare Latin editions—but we need your help. The more pre-orders we get for this classic work, the more quickly we can get it to you. Pre-order your copy of Polanus’ A System of Christian Theology today, and join Polanus in preserving the legacy of the Reformation.

Check out our other projects that will bring to you, for the first time ever in English, important authors and their untranslated works, such as Geerhardus Vos’ Reformed Dogmatics, The Sermons and Lectures of John Calvin in English, and The Latin Works of John Owen in English.