This post is written by Thaddeus J. Williams, author of Confronting Injustice without Compromising Truth, and is sponsored by Zondervan Academic.

Combining the word “social” with the word “justice” is a bit like mixing Mentos with soda. It is highly explosive, especially when we don’t bother to define our terms.

Some use “social justice” to describe what our ancient brothers and sisters did to rescue and adopt precious little image-bearers who had been discarded like trash at the literal human dumps outside many Roman cities. The same two words could describe William Wilberforce’s efforts to topple slavery in the UK, along with Frederick Douglass, Harriet Tubman, and others in the US. Nowadays, the same combination of two words could describe Christian efforts to abolish human trafficking, work with the inner-city poor, invest in microloans to help the destitute in the developing world, build hospitals and orphanages, upend racism, and so much more. When many brothers and sisters hear the words “social” and “justice” put together, that’s the kind of stuff they think about.

But for many, the identical configuration of 13 letters is packed with altogether non-Christian and even anti-Christian meanings. “Social justice” has become a waving banner over movements like Antifa, which sees physical violence against those who think differently as “both ethically justifiable and strategically effective.” It is also the rally cry of movements with a mission to “disrupt the western-prescribed nuclear family structure,” movements seeking to advance the multi-billion dollar abortion industry, movements on college campuses that have resorted to violence to silence opposing voices, movements that seek through force of law to shut down bakeries, crisis pregnancy centers, the Little Sisters of the Poor, and Christian universities who will not bow to their orthodoxy.

In other words, if we paint Christians who sound the call for biblical discernment about “social justice” as a bunch of culturally tone-deaf curmudgeons, then it is we who are tone-deaf to the current cultural moment. We are naïve to the meanings that have been baked into American minds with the word combo of “social” and “justice.”

Not all, but much of the current strife among Christians over social justice has to do with those opposite reactions the term “social justice” ignites on either side. For unity’s sake, I believe it’s worthwhile to ask together: What are the kinds of “social justice” that go beyond the bounds of our faith as we seek to fulfill God’s command to “Do justice” (Jer. 22:3).

Here are 5 points where I hope and pray we can agree as brothers and sisters:

Of course, this list is not exhaustive. I suspect that there are a hundred points where we could all agree that a Christian worldview offers something more redemptive and beautiful than what is often called “social justice” today.

One of the marks of Jesus, according to the prophet Isaiah, is that “He shall not judge by what his eyes see, or decide disputes by what his ears hear, but with righteousness, he shall judge the poor, and decide with equity for the meek of the earth” (Isa. 11:3-4). Our Messiah doesn’t seek justice at the level of headlines and hearsay. He calls us to true justice, not knee-jerk activism. If we really care about the oppressed and the God who cares about the oppressed, we must carefully distinguish between true biblical social justice and the kind of justice that masquerades as social justice in the 21st century. Otherwise, we will suffer unnecessary disunity and only hurt those the Bible calls us to help.

To delve deeper into how the Bible offers a more unifying, redemptive, and beautiful vision of justice than many of today’s social justice movements, check out Confronting Injustice without Compromising Truth: 12 Questions Christians Should Ask About Social Justice (Zondervan, 2020). 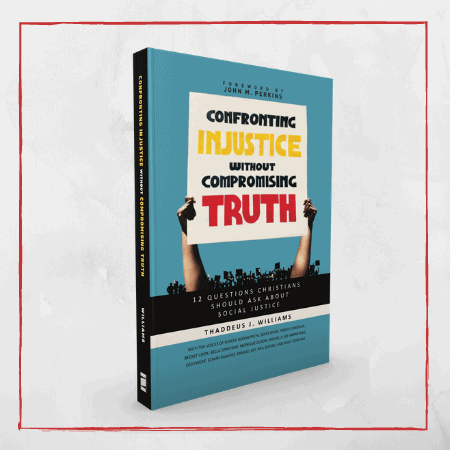 Thaddeus Williams, Ph.D., teaches systematic theology at Biola University in La Mirada, CA. He has also taught jurisprudence at Trinity Law School, worldview at L’Abri Fellowships, and ethics for the Blackstone Legal Fellowship and Federalist Society in Washington D.C. He lives in Orange County, CA with his wife and four children.