If all goes well, I should be somewhere between Germany and France right around the time this post goes live. I’ll be starting my EPIC: Switzerland journey in Southern France, then driving to Geneva tomorrow. I’m excited to get it all underway!

What Can We Learn from the Jordan Peterson Phenomenon?

I know, I know, I need to stop posting stuff about Peterson. But this analysis is really good. “He speaks, not just as an academic, not just as a general self-help guru. He speaks as if he is a father. People recognize in him a father figure, and they respond to him as a father figure — someone who represents a man who cares about them, who’s concerned for their well-being, and who speaks with authority into their situation.”

Social Injustice and the Gospel

John MacArthur is beginning a series highlighting his concerns with social justice as we hear it discussed in the church today. Whether or not you find yourself agreeing with his position, you’ll probably want to read along. If anyone has the credibility gain a hearing, it’s Dr. MacArthur!

Did you know there was once a country between the US and Canada? Neither did I.

Lessons on the Craft of Scholarly Reading

“Scholarly reading is a craft — one that academics are expected to figure out on our own. After all, it’s just reading. We all know how to do that, right? Yes and no. Scholarly reading remains an obscure, self-taught process of assembling, absorbing, and strategically deploying the writing of others.”

Unashamed of the Bible

John Piper loves the Word. “No matter which way my mind turns these days, I cannot escape the absolutely unique and essential role that the Bible plays in God’s purpose for the universe, and for history, and for the church, and for Christian schools, and for our personal lives, both now and in eternity.”

Everything You Know About Muscle Cramps Is Wrong

It always amuses me how little we actually know about the human body. “For a long time, experts believed that muscle fatigue or some sort of fluid imbalance — brought on either by dehydration or inadequate amounts of electrolytes in the blood — could disrupt muscle homeostasis in ways that triggered involuntary activity. This theory was based on some well-established muscle cramp trends, including the fact that intense exercise can produce a cramp, and that cramps are more common in summer than in winter. But new research complicates these old theories.”

The Woman Who Gets Lost Every Day

How strange. How fascinating. “Sharon Roseman gets lost every day. It happens everywhere she goes—in the grocery store, in the neighborhood she’s lived in for 20 years, and even in her own house. “When Sharon wakes, her walls seem to have moved overnight,” Michelle Coomber, who made a film about Roseman, told The Atlantic. “Her world can be transformed in the blink of an eye.” The short documentary is a portal into Roseman’s ever-transmogrifying world.” 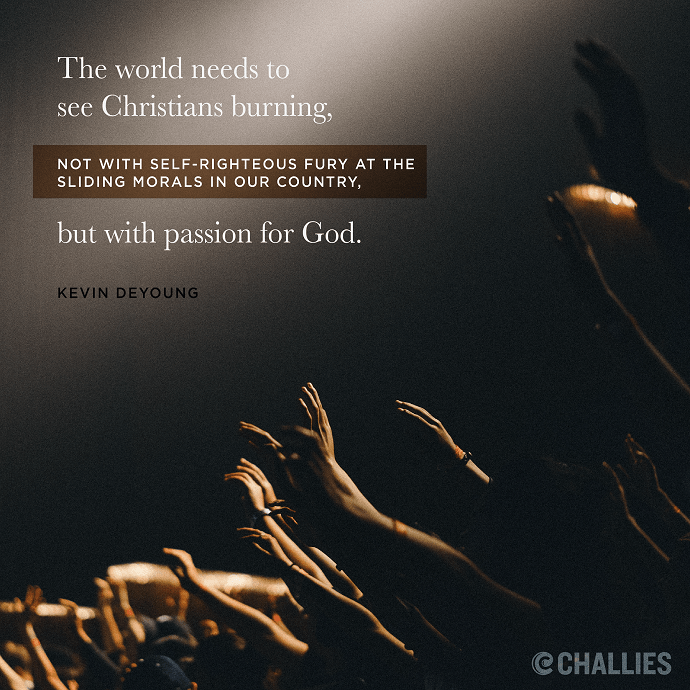 The world needs to see Christians burning, not with self-righteous fury at the sliding morals in our country, but with passion for God. —Kevin DeYoung