A quick look at my weather app shows a frigid -14 Celsius out there this morning. Beside it is the “feels like” temperature which accounts for wind and other factors; it is registering at -24. Maybe someone else would like to go out there and carry my trash to the road for pickup?

Today’s Kindle deals include only a handful of books, but there are a couple of important ones, including a volume in the NSBT series and Kidner’s excellent and readable Genesis commentary.

What Is the Meaning of Marriage?

Over the past few years there has been a lot of talk about the meaning of marriage, so it’s not like we don’t know what marriage is all about. Yet I still appreciated Wyatt Graham’s look across the whole Scripture here.

I so enjoyed reading this tribute to David Powlison by his wife, Nan. “David was beloved by God. Beloved by his Hawaiian Ohana, beloved by me and our children and grandchildren. He was loved by his colleagues and friends at CCEF and friends all over the world. We all miss David.”

Patterns of Evidence: The Red Sea Miracle is showing one night in theaters across the country. The film raises giant questions about the real location for the Israelites crossing site and its implication on your view of God. This is a film for the entire family. Let’s examine together the historical credibility of the Bible as it’s under great attack today. Join Timothy Mahoney as he retraces the steps of Moses and the Israelites, hearing ideas from all sides of the debate as you journey back to the land of the Bible in search of answers to one of the Bible’s biggest mysteries; where is the lost sea of the Exodus, and what really happened there? The event features a panel discussion afterward with Ken Ham, Kay Arthur, Janet Mefferd, Jeremy Lyon & Todd Starns. Tickets available now. (Sponsored Link)

How Do I Pray Without Ceasing? (Video)

Ligon Duncan provides some tips on that biblical injunction to praying without ceasing.

His Tale of Crossing Antarctica Was Riveting. But How Much Was Fiction?

American Colin O’Brady recently became the first person to ski alone and unassisted across Antarctica. Or so he claimed. But did he really? National Geographic covers an interesting scandal.

It’s a neat story, this. “In 1959, the Smithsonian Institution received a letter from Mrs. James ‘Shirley C.’ Wade offering to sell a linen banner bearing an ink portrait of the third president of the United States, Thomas Jefferson. An eagle carried the Jefferson portrait victoriously aloft framed in a halo of seven-pointed stars. From the bird’s beak streamed a ribbon proclaiming: ‘T. Jefferson President of the United States. John Adams is No More.'”

Chris Thomas: “I’m not actually fundamentally concerned about the flood of criticism for celebrity culture, I’m more concerned with what people propose as the antidote to it. Many responses are naive at best, or foolish at worst. For too many, the ideal church culture would combat our current predicament by idolising obscurity and flattening the collective voice of the body so that none would rise above the rest.”

What’s the Deal with Airplane Food?

“The Biscoff cookies you’re given as a participation prize for reaching cruising altitude and the warmed-up plastic container of pasta from your trans-Atlantic flight are shrouded in mystery. Most passengers don’t question where their complimentary food came from or how it got to them, despite how little information is given about the meal selection and preparation process. Would anyone stuck 35,000 feet up in the air turn down free food? Not me.” Not me either, even though it’s often borderline inedible.

Flashback: There Is No Cyberspace

The word “cyberspace” and the idea behind it make us believe that when we go online, we actually go somewhere. 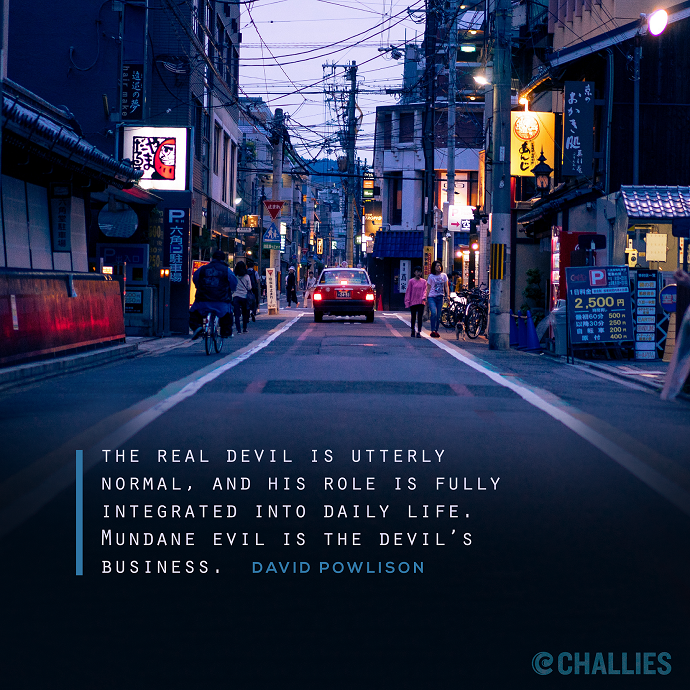 The real devil is utterly normal, and his role is fully integrated into daily life. Mundane evil is the devil’s business. —David Powlison